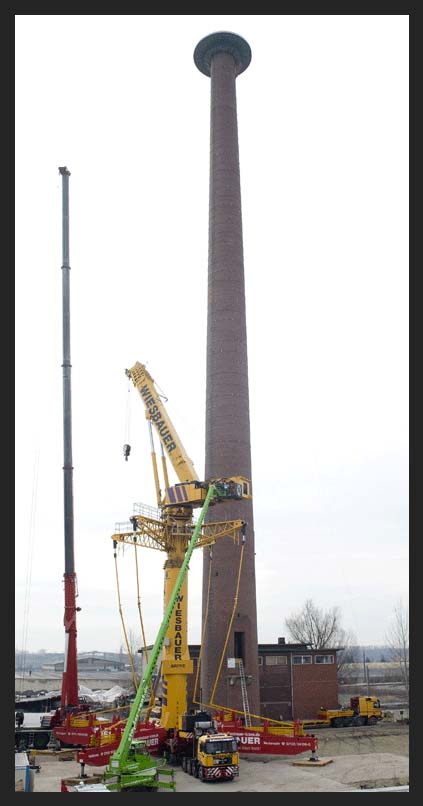 A German company considered several options for a challenging demolition project before selecting a Grove GTK1100.

Rental company and lifting specialist Scholl first looked at mobile and crawler crane options to dismantle a 45 tonne chimney top from a 100 m tall chimney in the city of Ludwigshafen. Jürgen Jensen, Scholl project manager, said there were prohibiting factors that ruled out other types of crane.

“When we presented our first option for the demolition, we were unable to get permissions from the local authority,” Jensen said. “It was at this stage we started to consider the GTK1100. We looked at other options, in addition to the GTK, but ruled them out because the logistics made their use impossible. In the end, we made the correct choice with the GTK1100 as everything went perfectly. And, it was faster and less costly than using alternative lifting systems.”

The first proposal was to use a large all terrain crane with full luffing jib and a personnel basket attached to the hook. A demolition crew would exit the basket to the chimney structure to begin a manual demolition. Local government authorities at Neustadt an der Weinstrasse did not approve this lift plan.

Scholl then approached GTK1100 owner Wiesbauer about using the crane and also looked at putting a large crawler or all terrain crane with luffing jib on the job. A lack of space on the ground eliminated the crawler and all terrains because there was insufficient room to rig a luffing jib.

Jochen Wiesbauer, managing director at Wiesbauer, said that the industry’s understanding of the GTK’s capabilities is growing. “The more we work with our GTK cranes, the more we understand their potential,” he said. “As soon as we started talking to Scholl and understood that this was a 45 tonne lift at 100 m with a lack of ground space, we instantly knew that the GTK was the solution. Not only was the GTK the only solution for the project, it was also faster and more cost-effective than the alternatives considered.”

For the lift, Scholl and Wiesbauer attached a Modulift lifting beam to the GTK’s hook block and attached it to four fixing points on the chimney top. Including rigging, the GTK lifted 47.2 tonnes at 100 m. Maximum capacity is 95 tonnes and maximum tip height is 143 m.

Used with permission from International Cranes and Specialized Transport.