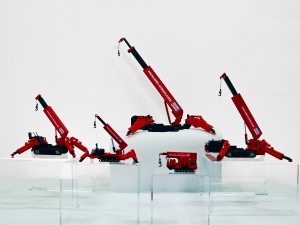 Just when people thought it couldn’t get any smaller, the mini yet mighty Unic spider crane, designed for lifting up to 6 tonnes in restricted access environments, has been dramatically shrunk to a scale of 1:40 to create a series of fun LEGO cranes.

The pioneering set of LEGO spider cranes, which are thought to be completely unique to the crane and toy industry alike, were commissioned by GGR Group, the official distributor of mini spider cranes and restricted access lifting machinery across the UK and Europe.

Appealing to the big kid in all of us, a total of five different LEGO Unic cranes have been produced, along with a series of limited edition LEGO kits for those enthusiasts looking to build their own Unic crane.   All five new models will make their debut at the Vertikal Days Exhibition next week, where they will be exhibited alongside their life-sized counterparts on stand 129. 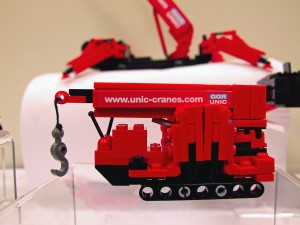 Designed and produced by a certified LEGO professional, great attention to detail was spent on making each of the LEGO spider cranes completely unique and fun in its own way.  First to be produced was the smallest Unic URW-095 crane which is made from 120 parts, has a 130mm extendable boom and flexible outriggers which can be folded away into a stowed position.  Sharing the same size boom is the URW-295 which also features an on-board control panel and is made from 130 parts.

The larger capacity Unic cranes, starting with the URW-376, have a moveable working tread, operator’s seat and lever control panel.  The URW-376 comes in 250 parts and has a 230mm boom, whilst the URW-506 LEGO crane boasts a 30cm extendable boom and on-board Safe Load Indicator control panel.  The biggest model in the range, the URW-706 is made from over 750 pieces and boasts an impressive 530mm telescopic boom.

Just like their life-size counterparts, all of the Unic LEGO models include a rope and hook, telescopic boom, as well as flexible outriggers which can be folded away in a stowed position.  It was this complex technical functionality, combined with a need to elegantly pack a lot of robust moving parts into a compact unit, that proved to be the most challenging aspect of the design. 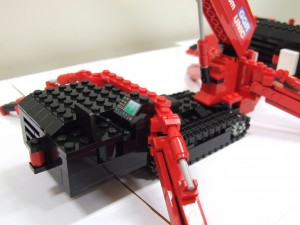 “We wanted to create something fresh and fun to the crane industry that boosts everyone’s spirits following the challenges over the past couple of years” comments GGR Group’s CEO Graeme Riley.  “We envisage these kits becoming highly coveted by adults and children alike” he concludes.