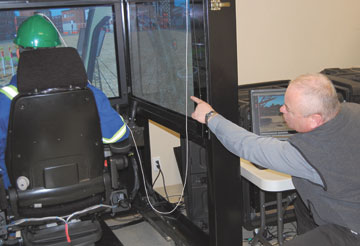 Not only is it preparing apprentice mobile and tower crane operators for the construction site, the Operating Engineers Training Institute of Ontario is a world leader in the development and use of simulators as teaching tools.

“We teach the students to be fully prepared and handle emergencies,” says Healey, stressing the simulators are an integral component of the curriculum and not some extra-curricular activity or an option.

They include a concrete pump simulator, a tower crane, and two mobile cranes simulators — a lattice boom crawler and a hydraulic mobile crane on rough terrain.

Some of the features include large plasma screens; manual controls and a head “tracker” connected to the safety helmet which changes viewpoints as the operator moves their head.

In operation since 1982, the Institute provides crane operator, heavy equipment and construction safety equipment programs both at its Oakville and its Morrisburg, Ont. campuses. The training arm of Local 793 of the International Union of Operating Engineers, its primary funding comes from the local’s Training Trust Fund and the Ministry of Training Colleges and Universities.

While the institute started using simulators back in 1999, it has greatly expanded their use — both in quality and number — during the past few years.

Its most recent addition was the conventional crane simulator. Modeled after a Manitowoc crane on campus, it is capable of being operated in the clamshell-, drag line- or pile-driving modes as well as regular crane mode.

The four simulators now on campus were developed and manufactured by Montreal-based Critical Mass Laboratories.

But the basic content is provided by the training department, working in conjunction with the Institute’s own information technology department, says Healey.

“We decided to avoid sensationalism,” says Healey, explaining the simulators are not equipped with flashing lights or sounds. “These aren’t video games.”

Unlike on the construction site, the students can make — and learn from — mistakes that could result in tragedy if they actually happened in the field.

Students usually spend a total of four to six hours operating the simulators, while an instructor monitors their progress from a central control desk.

“As one level of complexity is mastered, the student moves on the next level,” Healey says.

“By using the simulators the students familiarize themselves with the safe and efficient conditions to control load operations and gain competency before even sitting in a real crane.”

In this way the Institute achieves a seamless transition from the theory component to the practical component of its hoisting apprenticeship courses.

Considered a valuable learning aid by most students, the simulators have given the instructors the opportunity to work with the apprentices to achieve a higher degree of competency than was ever possible in the past, he says.

And as both the concrete pump simulator and the conventional crane simulator can be folded up and taken to trade and education shows, they help promote construction as a viable career path.

“We always have line ups at the shows,” Healey says.