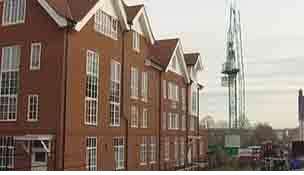 It has been reported that on Christmas Eve a tower crane was left in a precarious position and nearby flats evacuated in Allard Way, Saffron Walden, Essex after part of the crane collapsed.

Residents were evacuated by the police to a rest centre established by the local authority. Evacuated families have told of how the crane collapsed near homes and a school during a “freak” storm.

“The boom of the crane has collapsed and is hanging by a hawser. Crews have assisted in making the area safe which has involved evacuating a block of flats. The residents are being left in the care of the police and local authority. The housing estate the crane is in is largely unoccupied, the only place people are actually living on the estate is in the block of flats. Luckily no one has been hurt and the local authority has established a nearby rest centre for everyone who has been evacuated.”

The Fire and Rescue Service were unaware of what caused the crane to collapse and left the scene at at 7pm leaving the incident in the care of the police service who are managing a cordon around the crane. Engineers have now began the process of dismantling the crane.

“An investigation is being conducted by the Health and Safety Executive. There was a freak wind at around the time the crane collapsed. A garage was destroyed.”