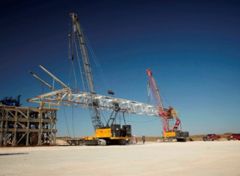 “Every rig we move weighs a million pounds or more, and every piece of equipment we have needs to operate in the tough demands of the oil and gas fields,” said Marty Benton, assistant terminal manager of 5J’s West Texas division. “The 50- and 100-ton crawlers worked perfectly in tandem with each other.”

Crane operator James Culerhouse praised the machines. “Even though twin lifts can be complicated, this one went quickly and without any problems,” Culerhouse said. “Since people aren’t as familiar with Sany’s products, some of our guys were skeptical at first, but I’m pretty sure this job put the questioning to rest.”