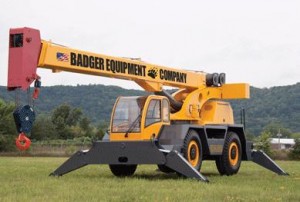 Manitex International in the USA has announced that its Badger Equipment Co. subsidiary has begun full production of a new 30 US ton (27.2 tonne) capacity cab-down style rough terrain crane. The company has received seven initial orders totaling about US$3 million from crane dealers and railroad equipment distributors.

The first crane was set to be delivered in late September. Badger unveiled and demonstrated the new rough terrain crane to dealers and customers at its facility in Winona, Minnesota, USA, in early September. The new crane and entire product line will continue to be sold under Badger’s existing brand names.

Paul Marxen, sales manager for Badger Equipment, said, “The 30 ton cab-down style rough-terrain crane is targeted to niche markets such as railroads, refineries, bridge contractors and heavy industrial users. A unique feature for railroad equipment managers is the ability to have high rail gear integrated at the factory, which simplifies their buying process and reduces lead time to get the crane into the field. It’s a product that we are confident will be met with great enthusiasm by our customers and will find solid demand in the marketplace.”

Used with permssion from the KHL Group