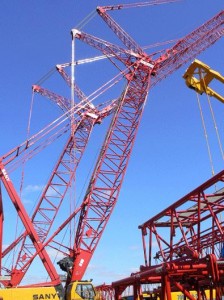 Imperial Crane Services in the USA has taken delivery of its third Sany crawler crane after becoming the manufacturer’s Midwest distributor of crawlers earlier in 2009.

The first unit, a 320 tonne capacity SCC3200, was delivered in March. It has been working at Citgo Petroleum’s Lemont Refinery on the Linde project.

The second shipment and the first of two 250 tonne capacity SCC2500C crawlers, was delivered in May, while the second arrived in October. The three cranes have all attachments, including luffers, said the company, and are available for rental or sale.

Sany America, founded in 2006, is an overseas subsidiary of Sany Heavy Industry Co., Ltd. Sany has invested US$ 100 million in a plant in Peachtree City, Georgia. Completion is set for the second half of 2010.  The manufacturer is now looking for a second location in the Midwest and a possible third on the West Coast.

Used with permsison from the KHL Group

Crane Smashes Through House in Cali.