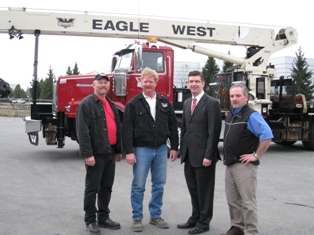 The awarding of these CraneSafe Certifications represent the culmination of over four years of planning and program development by the BCACS and mark a milestone in safety standards within the BC crane and construction industries.

The British Columbia (BC) government working hand in hand with the BC crane industry created the BC Association for Crane Safety (BCACS). Since November 2005 the BCACS has been developing a series of comprehensive crane operator training and certification programs and Eagle West Crane Inc. has been there at every turn in a leadership and advisory capacity.

Jim Barkman, Eagle West’s President and CEO has served in the executive group as the boards Vice Chair along with Ryan Burton representing Eagle West in both the tower crane and self erecting crane industry groups while Roy Popma represented Eagle West in both the mobile crane and boom truck industry groups. Further Brad Paddock and Rob Falk both Fleet Supervisors at Eagle West attended the “Subject Matter Expert” forums to lend their expertise to the development of the training program criteria.

Overall the CraneSafe Certification programs are broken out into three distinct industry sectors for training and certification:

At this programs inception crane industry and government stakeholders came together to form a working group from there sub-groups were formed with each sub-group representing one of the three distinct crane industry sectors; Tower and Self-Erect cranes, Boom Trucks and Mobile cranes.

The key goal of these workshops was to develop a crane operator training and certification system that makes sense and has value for all stakeholder groups and which is meaningful, enforceable and accessible.

While each crane industry sector is unique and needs unique training and certification the BCACS program also ensured that the core of all programs created works for everyone and is built on a set of common standards which include: