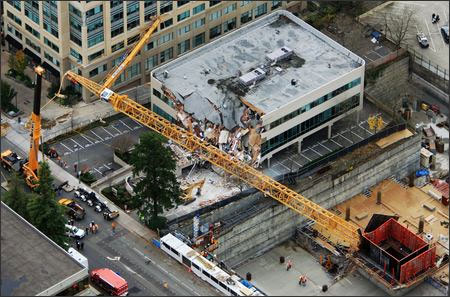 A local contractor and engineering firm have agreed to settle a lawsuit stemming from a 2006 accident in which a Microsoft attorney was killed after a tower crane collapsed onto his downtown Bellevue apartment, according to an attorney representing the victim’s family.

An investigation by the state Department of Labor and Industries determined that metal fatigue caused by a design flaw in the crane’s base — which was a steel frame anchored by existing concrete columns rather than a concrete foundation — caused the collapse.

MKA’s fine was overturned by the state Board of Industrial Insurance Appeals, CEO Jon Magnusson said. An administrative law judge ruled that L&I had no jurisdiction over MKA since the company was not the “controlling employer” at the site.

The trial was slated to start Monday, but the companies agreed to settle last week after MKA acknowledged some liability in a trial brief, said attorney Matt Knopp, who represents Ammon’s parents, Larry Ammon and Kathy Gaberson.

“This has been a long road for Matt’s parents. At the end of the day, this was about honoring their son and his memory. They stood up for Matt, and I think they feel they did the right thing and were vindicated by standing up for him,” Knopp said.

A third company, Northwest Tower Crane Services, which erected the crane, was dismissed from the lawsuit by Judge Michael Trickey.

Ammon’s mother was planning to visit her only child for his birthday about four days after the accident, she said Monday from her home in Pittsburgh, Pa.

“We’re very relieved that it’s finally resolved. It’s not that we’re ever going to get over the death of our son. The past 2 ½ years have been emotionally very trying for us.”

She said she was pleased to see Washington state enact tougher regulations on tower cranes and their operators after the incident.

“I cant walk or drive under them now. I have to cross the street or take a different route. And I’m not a worrier, but I don’t want to put myself anywhere near them,” she said.

Terms of the settlement were not disclosed Monday, since the court had to postpone finalizing the settlement and ruling on a few remaining motions. A hearing is set for May 4 so the judge can hear from all parties, said attorney Ted Buck, who represents Lease Crutcher Lewis.

But, he said, the idea is to keep the victim’s family “as comfortable as possible given everything they’ve been through.”

Ammon had moved to the Northwest for a job as a patent attorney at Microsoft about six months before the accident.

Three other buildings were damaged by the collapse, prompting their owners to seek damages. Lease Crutcher Lewis sued seven other subcontractors involved with the project, although most of those claims have been settled or dismissed, Buck said.

Lease Crutcher Lewis has a pending lawsuit against MKA, although no trial date has been set, Buck said.