Crane operators on building and construction sites throughout Australia must maintain sufficient clearances between cranes and other plant and structures to avoid contact or collision, a workplace organisation has warned.

Workplace Health and Safety Queensland says the warning comes after a worker was seriously injured after being hit by a falling scaffolding component on a high-rise construction site.

That incident happened when a tower crane was hoisting up its lifting gear near some scaffolding. As the tower crane’s equalising sheave was being hoisted, the Queensland work safety authority says it appears the lifting gear may have snagged on the scaffolding, causing a scaffolding component to fall.

The workplace authority says accidents have the potential to occur during the operation of tower cranes as a result of either personnel movement within the crane operating area or, as in the present case, contact or collision between the crane and other plant and structures, such as scaffolding or other cranes.

It says a number of considerations must be taken into account.

First and foremost, it is important to ensure sufficient clearance and safe distances between the crane and scaffolding or overhead electric wires, with contact between cranes and scaffolding not only presenting a risk of possible injury but also creating the potential for structural damage to the building. 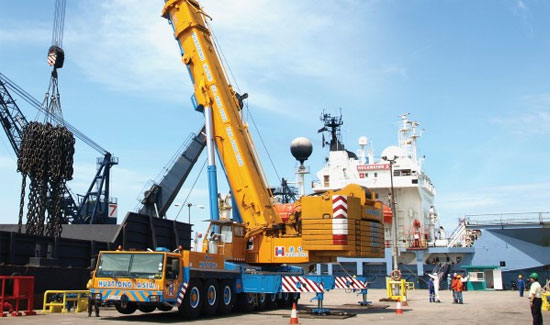 Then, there are the work systems. When lifting or lowering the crane hook or load, it is important to ensure that the raise speed is sufficiently moderate so that contact with structures can be avoided and the dogger has a clear view of both the load and the hook at all times.

Then, there is the crane crew, the number and composition of which should be determined by a risk assessment according to the size and complexity of the work. Directions to a crane operator should only ever be given by a licensed dogger, and the assessment should consider the need for a crane coordinator.

Finally, there is the issue of communication. A system of reliable communication is required between the crane operator and the doggers.

If not, serious injuries will continue to occur.