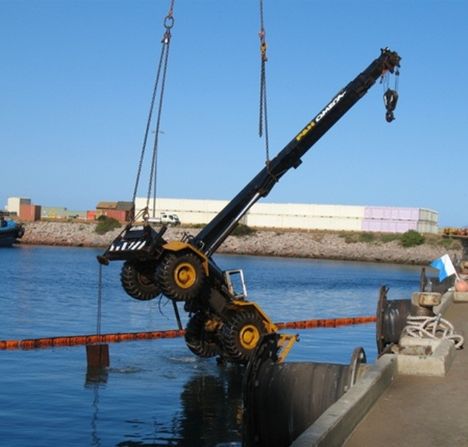 A 20 ton RT crane that tumbled into the water at Esperance port in Western Australia at the weekend has now been recovered. The crane was installing protective barriers along the wharf for smaller vessels to berth, when it went over the edge. The driver’s reactions were quick enough that he managed to jump clear before the crane went in to the 14.5 metre deep water and was uninjured. While an investigation is underway the preliminary findings are that the crane’s brakes failed. A blood test on the operator gave him the all clear. The port’s chief executive Michal Frydrych said: ““Something is thought to have gone wrong with the brakes and the driver, who is an experienced operator, wasn’t able to stop in time, There was no danger of oil leaving the immediate vicinity of the berth.” Divers had to not only find and rig the crane, but also retrieve its hydraulic tank which had broken away from the crane when it hit the water. Goldfields Crane Hire was called in to help recover the almost vintage P&H Omega in double quick time as two large ships were waiting to berth.