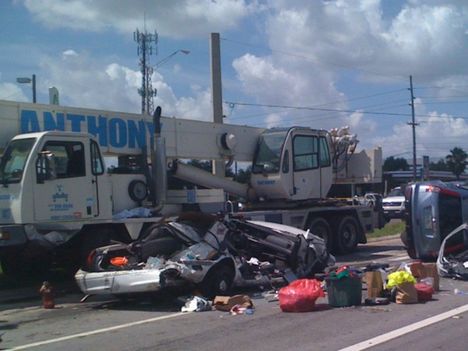 A truck crane that ran a red traffic light caused a six car collision last week in Tampa, Florida. The crane, a four axle Terex owned by Anthony crane rental, reportedly ran through a red light and crashed into the patrol car of a Hillsborough County sheriff’s deputy and a four by four. The deputy, Deborah Walker, 51 survived the collision, but is in critical condition, while seven others were injured. Police have said that the crane’s air brakes appear to have failed causing the crane to plough through the lights and crash into traffic, dragging to vehicles with it until it came to rest against a large bus and several other vehicles. Two large  trucks pulled the crane off of the deputy’s car, allowing her to be extracted from the car.