Amman Jordan On May 16th a tower crane collapsed while building the Jordan Gate Project. Working on the 44th floor at a reported 220 meters the horizontal superstructure suffered a massive failure. This weekend the crane is to be dismantled in a planned three day process.

As you might imagine, this dismantle is going to be tricky to say the least. The jib is folded in multiple directions and will require securing as the sections are cut free with a torch. Often these types of operations are done from the safety of a second personnel basket from a second crane. Given that this is 220 meters up, the logistics of setting up a ground crane with that much boom and a derrick are daunting. As a result it’s likely that just to get this down one guy is going to have to be on what remains of the crane to make the cuts. Shifting loads, bound loads releasing energy, and falling items are going to keep this man in peril throughout the operation. If there weren’t other buildings around it would be better to tie a rope to it and cut it down like a tree leaning the wrong way. Alas, we are never that lucky.

I haven’t found any reports as to a cause of this accident. Often when the jib of a crane collapses the counter jib stays put. As a guy who has installed and removed thousands of counterweights, that’s impressive. In this case it failed as would be intuitively expected. You could expect that there was a tower top failure, but the shock of a pendant failure on either jib might cause this as well. It’s impossible to narrow it down without further information.

It might be important to note that this job has suffered other problems. 3 stories collapsed killing 4 and injuring 15 in 2006. A fire on the eighth floor broke out in the same year but no injuries were reported. The current crane accident left no one physically injured (an operator survived this?) but an Egyptian man was treated for shock. The crane dismantle is expected to take three days. Day one might be over at the writing of this blog. My thoughts are with the men faced with this task 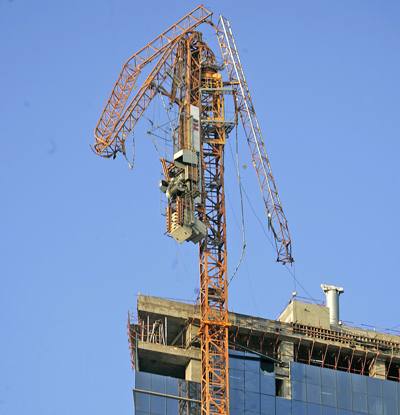