A 20 year old tractor driver also died at the scene, but it is unclear if he was in his vehicle at the time and how it relates to the crane accident. Local reports say that the crane collapsed from its base and that the weather was very stormy at the time with strong winds. 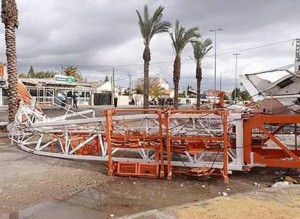