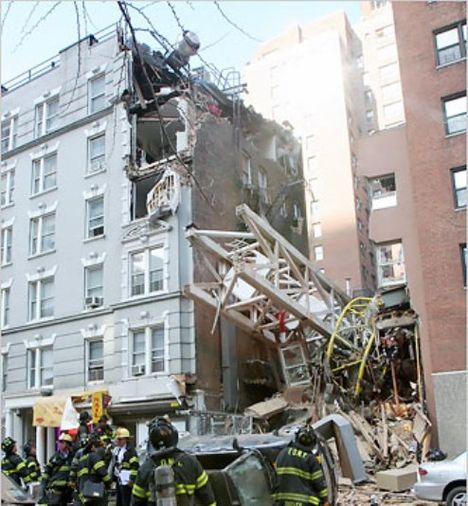 New York City’s department of buildings has released a new report by consulting engineers Ove Arup on the tower crane collapse last March that killed seven people. The new report lays the blame squarely on improper use of slings, and also addresses the question of whether the friction base used at the foot of the crane may have contributed to the accident.

The department of buildings (DOB) commissioned Ove Arup almost a year ago, after the March 15 accident, to provide engineering and investigative services. The engineers reviewed the tower components, pertinent codes and standards, the OSHA report, computer analyses of the tower structure, photographs and other documentation. They also commissioned a peer review of the original professional engineer’s plan for the crane’s erection and climbing.

In line with the case being made by district attorney Robert Morgenthau against master rigger William Rapetti, Ove Arup found that the collapse of the tower was initiated when four polyester slings supporting an 18th floor tie in collar failed. The engineers said one of the slings showed both UV and physical damage, and should never have been used.

The number of supports provided by the slings did not meet manufacturer Favelle Favco’s requirements, and the slings were installed in the wrong place: instead of being attached to the crane’s horizontal chords, the slings had been tied around the point where diagonal chords met the vertical edges of the tower, meaning they were trapped in a V-shaped corner. No padding was used to protect the slings from sharp bearing edges, and the position of the slings meant they were bunched and edge loaded.

Ove Arup said that the tie-in collars had limited vertical capacity. Following common procedure, the collars were supported initially by polyester slings from the collar to the tower, and then by cables. The system, Ove Arup said, had little ductility to resist the effects of falling debris, but violated no standards.

Welds on the base plate holding the tie-in beams to the building were not to code, but Ove Arup said they would not have prevented the crane from collapsing even if they had been properly welded. Similarly, wire ropes used to provide vertical support for the third and ninth floor tie-ins were not installed in line with accepted rigging standards or manufacturers requirements, but this would not have prevented the accident.

Once the two collars on the eighteenth and ninth floor had collapsed, the crane rotated around the third floor collar, with the top of the crane falling away from the building. The foot of the crane was held in place horizontally by steel shoes, and by friction.

Some in the industry (and in the pages of Cranes Today) have questioned whether the crane would have collapsed if it had been restrained to the base in some way. A picture of the base shows that the steel shows holding the feet of the tower were crushed by downwards pressure (the crane rocking backwards and forwards onto them, presumably) and not stretched by the horizontal movement of the crane. Ove Arup says that this shows that the design of the base had adequate lateral capacity.

Addressing the concerns over the base design, Ove Arup said, “the base design was in accordance with acceptable engineering practice; however, under the unanticipated and extreme conditions imparted by the falling collars to the tower and foundation support, the ability for the tower legs to lift and the foundation to slide resulted in the mechanism of failure observed. Had the base been fixed and the tower legs restrained against uplift, it is our professional opinion that another mechanism of collapse would have been likely. These have not, however, been studied as part of this investigation.”

The full 340 page report is available on the Department of Buildings website.