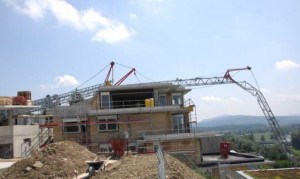 The reportedly 34t/m crane with 43 metre jib was being used with a concrete bucket at the time and was about to discharge a load when it went over and crashed onto the building.

It looks as though the crane simply tipped from its base suggesting an overload. Up to 15 construction workers were on site at the time but no one was injured in the incident.

Crane safety alert on the effects of wind