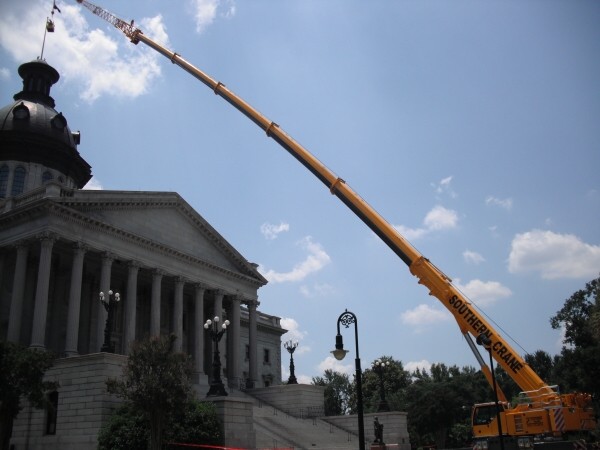 Using its Liebherr LTM 1160-5.1 all-terrain crane, Southern Crane, Columbia, S.C., was hired to help South Carolina’s Capitol building twice. The first instance was to repair the 186-foot flag pole atop South Carolina’s Capitol building, which had a broken bearing and could not be raised or lowered, and was needed to fly half-staff to honor South Carolina soldiers killed in the line of duty. The crane, dubbed “The Bear,” was equipped with a 203-foot main boom and 141-foot jib which easily reached the 190-foot radius needed to lift crews to the flagpole’s peak at 186 feet.

“That was a dark cloud week for me,” said Capitol facilities manager David Martin. “I was relieved to find Southern Crane and its ‘Bear’ could so quickly help us restore the flagpole.”

Replacing the broken bearing wasn’t the only challenge facing Southern Crane’s workers. Federal law requires flags to fly 24 hours a day unless they are being exchanged for new flags, so crews tied the flags to the crane lines as they installed the new bearing.

The second project came just a few days later when the crane was needed to repair the pre-fabricated flagpole cable, which had broken during a storm, and the flags were lying on the roof of the State House.

“To have something go wrong twice in a row sent us all into a panic. When I called Southern Crane, they were very accommodating and rushed right back to the rescue,” said Martin.

The Annual Sales Meeting. Having one this year?