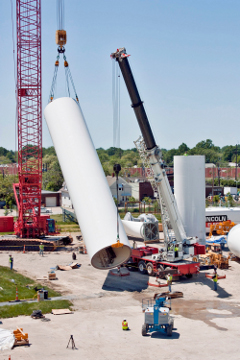 Two Manitowoc cranes installed a wind tower in Cleveland, Ohio, over a four-day period earlier this year. Located outside the headquarters of Lincoln Electric, the 443-foot turbine is one of the largest urban wind towers in North America.

A Manitowoc 16000 crawler crane and a Grove GMK5120B all-terrain crane from All Erection & Crane Rental Corp. were utilized to erect the 2.5 MW turbine. The first task of the project was off-loading and erecting the four tower sections from their delivery trucks. The sections were lifted and walked into position by the Model 16000, with the GMK5120B providing tailing support. Each section weighed approximately 70 tons.

With the tower sections installed, the cranes then worked together to install the 99-ton nacelle and drive train, which was handled in two lifts. Finally, three rotor blades were bolted together at ground level before the entire 64-ton assembly was carefully lifted into place.

Following completion of the $5.9 million project, Lincoln Electric staged an inauguration ceremony to celebrate its success. “The cranes on this job performed admirably and everything ran smoothly and on time,” said George Blankenship, president of Lincoln Electric North America.

A third crane, a 30-ton RT530E-2 from Grove’s rough-terrain range, was also used in the early stages of construction for land preparation.

The Grove GMK5120B is a 120-ton capacity all-terrain crane with a 167-foot boom mounted on a five-axle carrier.