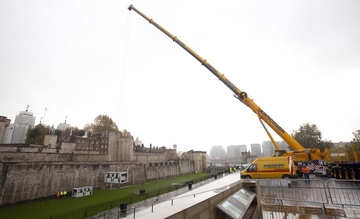 Three  Ainscough mobile cranes have been on site at the Tower of London to provide the lift capabilities for installation of the annual winter ice rink attraction on the Tower’s grounds.  Crane rental firm Ainscough have been contracted to carry out the planning and supervision of the lifts needed to support construction of the arena and visitors facilities.  Two Liebherrs, a 250t LTM 1250-1 and a 100t LTM 1100/2, along with a 25t Kato City Class crane, were used for several lifts, including the careful placement of three 5t chillers that will eventually form the ice.  The job was further complicated by the need to keep each crane’s total weight under 25t during the lifts, a necessity to comply with the vehicle weight restrictions on the cobbled stone pedestrianised area from which operations took place.  Ainscough’s contract lift manager for the project, Steve Scott, commented: “The project was meticulously planned to ensure public safety whilst this impressive seasonal attraction is built.  “The trio of mobile cranes we’ve utilised gave us the required positioning for the lifts, and we enforced load-distribution measures to ensure we did not exceed the 25t limits on the upper level cobbled stone pedestrian area.”