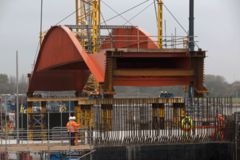 A bridge has been lifted into place in East London, UK, ready for the London Olympics in 2012, to provide a link into the Olympic Park for local residents in Hackney and Waltham Forest.  The bridge spans Ruckholt Road, creating a new link between Hackney East Marsh and the Eton Manor site in the north of the Olympic Park.  During the games, the new bridge will be the main route into the Olympic Park for spectators arriving at the Northern Spectator Mall. A temporary bridge was also lifted into place for the extra spectator numbers during the games. It will be removed when the games are over, and the main bridge will remain as access to the new sports and leisure facilities in Eton Manor, and into the wider Olympic Park site.  One of the largest cranes in Europe was used to lift the 200-tonne permanent bridge structure into place. The arched bridge is 42 m long, 6 m wide.  Work will now take place on the approach areas on both sides of the bridge. Construction work will be finished next year and the bridge will be used for the first time by spectators during the 2012 Games.  The bridge work was carried out by Skanska.