Tower Crane Three operates from the centre. It swivels from job to job between the other cranes, lifting and lowering loads. 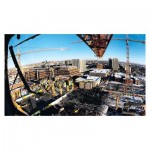 With a boom that stretches 55 metres, Tower Crane Three can lift 12,000 kilograms. It stands 65 metres high and can work in winds up to 70 kilometres an hour.

An eight-storey health centre with a nine-storey parkade that will eventually serve a million patients a year on the university campus.