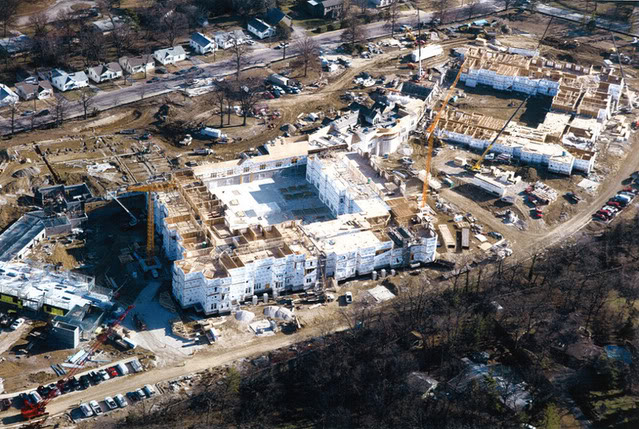 “Saint Louis is a rough terrain and standard hydro crane community…I think that’s about to change” stated Mike Brys, Site Superintendent for the Paric Corporation, after working with two San Marco SMT Tower Cranes rented from Custom Service Crane Inc for a major project. The Aberdeen Heights project in Kirkwood, Missouri, is where over 600, 000 total square feet of senior housing construction including four to five storey wall panel construction and trussed roof with center courtyards has been built.

Directly adjacent to their site, another framing contractor was working on Building A, a very similar four storey structure. The obvious difference was that they were using four mobile cranes to service the project. “Progress on the building using the two tower cranes is substantially further along” commented Randy Huffman, Custom Service Crane, Inc. owner. These projects presented an opportunity to illustrate the comparison of the use of “state of the art” tower cranes on a mobile base to more traditional mobile cranes.

Even though the two projects started within weeks of each other, framing Building B, using the tower cranes completed faster. Jeremy Pokorny with Con Tech Carpentry said, “Both buildings were on similar schedules but we’ve completed and they haven’t. There’s no comparison for tower cranes versus mobile cranes, the tower cranes could reach everywhere, and the mobile cranes can’t”. Mike Brys from Paric Corportation commented further by saying “The other contractors definitely had to work harder on their project using the mobile cranes and since they are still in production paying higher costs”.

Jeremy commented “The decision to go with the San Marco’s came with a big pay day. Everything ran smoothly. We could reach everything we needed to reach, we didn’t need to move materials for the crane to get access, didn’t need an extra laborer for signaling the crane, if we had to do it over again, we’d do it the same way, no doubt”.

Through the SMT’s efficient technology and simple operation, the two tower cranes were able to access materials and every part of the large construction site without delay and without site roads. The San Marco tower cranes created direct cost reductions because there is no need for off road forklifts, rough terrain or mobile cranes, or other forms of rented onsite hoisting equipment.

Bottom line; A contractor can rent a tower crane for the same or less cost as other temporary crane services while cutting other major costs. Mike Brys recommended, “I would definitely encourage Con Tech Carpentry to keep using the San Marco SMT Tower Cranes for future projects because of their simplicity to set up and use and their reduced need for a staging area”

Custom Service Crane is the exclusive Eagle West dealer for Illinois with service into Indiana, Missouri and Michigan.