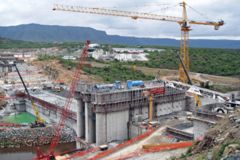 Cost and time over-runs are every construction manager’s nightmare. There are many factors that can contribute to these, but as a series of case studies show, one of the best ways to avoid them is to specify the right equipment for the job and use it correctly. In fact, as many of the projects featured in this article illustrate, using the right equipment can mean a competitive advantage for contractors, allowing them to finish work ahead of schedule.

A good example is the De Hoop (“The Hope”) Dam in South Africa, where ten Manitowoc cranes are being used on the construction project. When complete the dam will be 81 m high and stretch more than 1 km across the Steelpoort River in Limpopo, South Africa.

The cranes, which include a mix of Potain tower cranes, a Manitowoc crawler crane and Grove mobile cranes, are working on construction of the outlet works of the dam, which will require 930000 m3 of concrete to complete.

The location and terrain are two major challenges on site. The dam sits in the middle of an untouched rural landscape, in a river valley with steep slopes of loose earth either side. To complicate matters, a river diversion also runs through the site.

Henry Wells, managing director at South African dealer Crane Load Tech, said roads had to be constructed to ease transport of the mobile and crawler cranes.

“We are used to working on job sites with restricted access, but De Hoop is among the most extreme,” he said. “On the project we’ve built temporary access roads across the slopes and contours so the cranes can travel the undulating terrain. We were able to manoeuvre the cranes to where they can offer maximum coverage and the most efficient delivery of materials.”

John Baker, chief engineer for the client, the South African Department of Water Affairs, said the wide range of cranes on the job was helping the project proceed on schedule.

“We chose a variety of cranes so we could handle any of the challenges of such a difficult terrain,” he said. “Large areas of the site are difficult to negotiate, so the mobile cranes are essential for accessing certain areas. The tower cranes provide the height and reach to cover large areas of the dam, and the crawler crane handles the heavier lifts. The cranes work well as a team, and their reliability means this five-year project remains on schedule.”

A 25 tonne Potain MD 485 B is pouring the majority of the concrete. For smaller lifts, there is also a 4 tonne Potain Igo 50 self-erecting crane. A 90 tonne Manitowoc Model 10000 crawler crane is also on site as is a 60 tonne TMS700E Grove truck-mounted crane, a 60 tonne RT760E rough terrain and a

The cranes have been on the De Hoop site April 2009 and will remain until completion of the dam in August next year.

Meanwhile in Rio, the single pylon on the Canel do Fundão Bridge, Rio de Janeiro’s first cable-stayed road bridge, has reached its topping out height of 95.5 m on schedule with main contractor, Queiroz Galvão Group, relying on a Liebherr top slewing tower crane throughout construction.

The new bridge will connect Fundão Island to the Linha Vermelha (Red Line) Highway in the North Zone of the Brazilian city and one of the main expressways in Rio de Janeiro – connecting the south and north zones, as well as Galeão International Airport.

The 780 m long bridge is scheduled to open later this year and will have a free span of 180 m and a pylon height of 95.5 m from the foundation block. Some 25000 vehicles per day are expected to use it.

Liebherr Brazil’s Commercial Manager, Luiz Mierelles said, “We are pleased that a Liebherr crane is being used to construct such a prestigious project in Brazil. In addition to being a great architectural achievement, the bridge is also being constructed in a short period of time, which highlights the city’s dedication to meeting the infrastructural deadlines before the World Cup and Olympic Games.”

“Our collaboration with Queiroz Galvão Group has once again met another tremendous landmark, as the Canal do Fundão bridge is approaching its scheduled completion,” he added.

While the constant-section carriages cover deck widths of 13.5 m, the variable-section ones are more flexible and can cover widths of up to 16.75 m.

This flexibility also allows them to be used in transition zones between the actual viaducts and in junction areas. The production rate of the variable-section carriages results in a casting length of 12.5 m every two days, while on the constant sections, progress is an average of three 12 m long casting segments completed every week.

Deputy technical director for the project, Maurizio La Mattina said, “An important advantage stemming from the use of these carriages is being able to carry out all processes relating to the slab directly from the carriage, without having to work under the viaduct.”

In Venezuela meanwhile, familiarity with hydrodemolition allowed a contractor to win a prestigious job and complete it successfully. The 10.2 GW capacity Guri Hydroelectric Power Station is one of the world’s largest hydroelectric power generation schemes and supplies about 70% of Venezuela’s power requirements. It went on-line in 1978 and was extended in 1986, taking the height of the combined concrete gravity and earth embankment dam to 162 m and giving it a crest length of 7.4 km.

Fapco proposed the hydrodemolition technique of using high pressure water jetting to selectively remove only the weakened and damaged sections of the concrete spillway, and leave a very rough surface for bonding on the fresh concrete. Breakers would have left fractures and micro cracking in the undamaged concrete left in place.

Frapco enlisted the help of hydrodemolition robot manufacturer Conjet. The company’s executive vice president, Lars Göran Nilsson said, “We worked closely with Fapco and recommended using a Conjet Robot 364 operating on a purpose built working platform rolling up and down the steep face of the spillway.

“Fapco adopted and adapted our suggestion and bought a Robot 364 specifically for the spillway repairs and designed and built the platform for it to work from.”

Working from late 2009 to May this year, Fapco completely repaired one channel and performed partial repairs to another, covering a total area of about 7500 m2. The Robot 364, operating at water pressures up to 1200 bar, selectively removed the weakened and damaged concrete from the spillway surfaces to depths ranging from 20 mm to 150 mm and in some instances exposing the steel reinforcement.

Concrete removal was up to 69 m2/day and was intermittent due to a combination of moving the platform, adjusting the robot to the spillway geometry and refilling the water tank supplying the robot. After concrete removal Fapco followed on with a spray applied 800 kN/m2 strength mortar in areas less than 100 mm deep and 500 kN/m2 strength concrete in the deeper areas.

Elsewhere in Latin America, the expansion of the Panama Canal is one of the largest and economically important projects currently underway in the region. The contract for rock and earth excavation and the construction of new locks, using some 7 million m3 of concrete, was awarded to Grupo Unidos por el Canal (GUPC), a consortium comprising Impregilo (Italy), Jan De Nul (Belgium), Sacyr (Spain) and Cusa (Panama) in 2009. Completion of this part of the project is expected in late 2014, in time for the 100th anniversary of the canal’s opening.

In order to achieve this, the consortium needs to produce concrete almost non-stop for a period of some 30 months. Simem is supplying two of its Wetbeton plants to the project – one on the Atlantic and one on the Pacific side. Each is equipped with four MSO6000-HLS twin shaft mixers, allowing each to produce a staggering 720 m3 of concrete per hour. Simem says this makes them some of the highest capacity plants ever made.

All equipment was designed and produced by Simem in Italy and shipped to the sites. Each mixing tower is considered a separate plant, and is equipped with a computer control systems, while all the electrical panels have climate control to ensure a problem free operation.

The plants were installed under the supervision of staff from Simem America, starting in June last year. The first concrete was produced that November and all the plants were in place by February 2011. Production was gradually ramped-up, until April this year, when it hit the required capacity.

An upgrade of a different type is underway at Colombia’s biggest airport, “El Dorado” in Bogotá, which is also Latin America’s biggest air cargo hub. Work to increase the airport’s capacity began in 2008, so it could better cope with the 19 million passengers that use it annually.

The COP 11 trillion (US$ 5.9 billion) project began with demolition of old buildings, then in 2010, Opain, the consortium that will operate the airport until 2027 began work on construction of a new Terminal 2. The main workhorses of this are three 5 LC 5010 tower cranes from Linden Comansa, with maximum loads of 4 and 5 tonnes and 50 m jibs, which are being used for placement of reinforcement, concrete pours and other general lifting duties. These include placing structural steel elements, which can weigh up to 7 tonnes.

These projects all illustrate how the right equipment can not only help overcome technical hurdles, but also improve contractors’ performance on projects. They also illustrate that many equipment manufacturers are prepared to lend their expertise to contractors and provide advice or bespoke solutions.