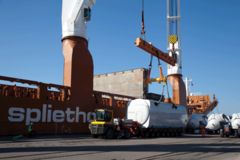 A Vestas nacelle is lowered into awaiting dockside transport

The design of equipment for lifting and, particularly, transporting wind energy components is increasingly becoming the concern of turbine OEMs and handlers, including ports.

An example of how wind energy components can shape design comes with the latest model from wind turbine manufacturer Vestas, the V112-3.0 MW. The first of these 3 MW units will have been erected on the Macarthur Wind Farm in Victoria, Australia by the end of this year. The V112-3.0 MW will then appear in a number of European projects.

Kim Bredo Rahbek, Vestas vice president for transport and handling solutions, said the 54.6 metre-long blades of the V112-3.0 MW were pushing the boundary when it came to transport.

“Up until 44 m blades we have been piggy-backing on other type of industries, for example, chimney manufacturers, that had to transport long items, but we knew we would break the ice on this project and there would not be a trailer on the market that could be adapted.”

Heavier, wider and longer wind turbine components are also a major consideration for those involved in processing them through ports. The Port of Vancouver in Washington State, USA specialises in break bulk and project type cargo. About five years ago, the port made a strategic decision to get involved with wind energy to much greater extent.

“In 2006 we saw the size of components getting much larger. They started around 19 tonnes each, now we are handling nacelles over 90 tonnes and we are being told the next generations could be up to 132 tonnes,” says Alistair Smith, senior director of marketing and operations at the Port of Vancouver.

One of the major investments was a 140 tonne capacity Liebherr LHM 500S mobile harbour crane. Smith said a 100 tonne model had been recommended to the port. “That was good decision knowing how these components are expanding in size, it was so successful we ended up getting a second in 2009.”

“With the 140 you can reach right across to the offshore side of the vessel and pick a heavy nacelle but, with the smaller crane, you would need to turn the vessel which causes delay to the longshore gangs.”

The Liebherr LHM 500S’ have power rotators installed to position cargo without having to re-position the crane. The port also has a Paceco Portainer container crane, with a turntable allowing cargo to be rotated for loading or unloading. “This provides additional flexibility for cargo to be properly positioned either in the vessel or on the dock. This turntable also allows for this crane to handle longer cargo lengths,” explains Smith.

The length of the load also presents a challenge on the road, as does the requirement to protect the blades. Vestas set up a strategic development project with specialized transport equipment manufacturer Broshuis B.V, based in the Netherlands, in which it laid out its blade framing requirements and the manufacturer designed the trailer to suit. This was followed by testing.

“It was a case of perceiving the future requirements of blade transport,” explains Rahbek, “With the expectation the design would be adopted by other manufacturers and become an industry standard. The result was the Switch blade trailer, which can negotiate roundabouts, and drive through tunnels and under bridges despite the 54.6 m long blades of the V112-3.0 MW turbine.

Rahbek continues, “The ability to corner and get below obstacles, like bridges and tunnels, is very important. We are now way beyond our prototyping phase and going into serial production, not necessarily in every market, but the technology is available – now the trailer manufacturers are ramping up their production to meet the requirements.”

To physically lift these longer blades a new “blade gripper” design was initiated by Vestas, where the blade is held at the centre of gravity position. It is designed to easily hook on to and, more importantly, release the grip of a blade when it has been attached to the hub.

When it comes to tower sections, the latest, heavier and wider designs are often not suited to any contact across their length, says Alistair Smith at the Port of Vancouver. The preference is to lift from the ends, so dolly trailer systems have been produced.

The system was designed by a local stevedore and manufactured on the port’s behalf by a couple of regional companies that build specialized marine equipment, explains Smith. It incorporates a seating area within the front dolly and the foot of the tower. At each end of the tower there are bolted sections with feet that are set down on the seating arrangements on the front end. Then the back end is also set down on a dolly. The feet attached to each end are also used to stop the towers rolling away on the quay.

From a capacity point of view, the port deals with 2 to 3 MW wind turbines on a regular basic which is the most common land-based equipment in the USA, says Smith. “When we started we were doing 660 KW and the nacelle weighed 19 tonnes, so it has been an exponential increase.

“You might get a higher MW output but they are going to have to try and contain the weight because you will need the cranes on site to erect them. You will get to the point where you will need a complete new range of cranes, or design a turbine within what is available today.”

In the future the Port of Vancouver sees nacelles forcing flatbed trailers to be upgraded for transport in the port.

Transport challenges exist beyond roads and, in many cases, other options become more economical; one of them being by rail. A challenge arises when the blades are longer than a single rail carriage, in which case the blade must be supported across two carriages. Vestas came up with a sliding system, in which two blades are lying next to each other, but in opposite directions on two railway carriages. The blades are supported 10 m from both ends, and stand on turntables. The blades can slide to even out the displacement when driving through curves.

Smith confirms the use of rail, “The most cost effective mode of transport is rail over a distance of 300 miles but the clearance has to be taken into consideration. If you have 16 feet diameter towers but a rail clearance of 14.2 feet, you end up sending a lot of that by truck, but now most of the OEMs are trying to design their towers to suit rail, so they are moving away from tapered to cylinders.”

As much as protecting components from damage, mitigating accidents is a vital part of transport design, adds Rahbek. “It is easy to imagine that dropping a nacelle, weighing maybe more than 120 tonnes, is like a bowling ball and the inertia would be devastating to anything it

can lift it up and transport it to a new position.

“You could say that what the eye does not see is not a problem but, if you do not transport a blade properly, you might not know if you have made internal stress damages that would appear 5 to 10 years earlier than expected,” adds Rahbek.

“Transport is now a business of its own,” says Rahbek. “We have to make sure those products make the journey at the right cost and well. Part of the knowledge is to have a strategy in each region and understand local requirements but, still with a global product, as much as it can be global. We have to go out and understand the authorities, legislation and what manufacturers are available.”

In the USA, there are five regions ripe for growth, says Smith: the upper Mid-West, South West, Pacific North West, California and Texas. The Port of Vancouver will supply the first three, while California and Texas will be served by their own ports.

There is about 5,500 MW in Oregon, Washington, Idaho and Montana. That figure has risen from zero in about 10 years. “There is an additional 4,000 MW approved, plus an additional 5,300 MW in the permit process and an additional 2,300 MW in proposal stage,” explains Smith.

One major concern in the USA is the proposed end to the Production Tax Credit (PTC) at the end of 2012. It is a government subsidy providing a 2.2 US cent per kilowatt-hour (kW/h) benefit for the first ten years of a renewable energy facility’s operation.

“When it expires there is a tremendous drop off. The OEMs and wind farm developers fully understand this. They are trying to cram 12 months’ worth of shipments into an eight month period to allow them time to get the wind farm erected and operational before 31 December next year,” says Smith.

Relevant stakeholders, including the Port of Vancouver, are lobbying the government for an extension to the PTC. If an extension is forthcoming, however, it needs to be announced now due to OEM leads times, adds Smith.

“Tax credit is a very important subsidy for wind energy. The tax credit needs to be now, as OEMs have to get equipment in the production line about a year ahead, so if you wait until next June or September to extend that you have to add a year to the production cycle.”