A crane crashed into a house in Shoreview, Minnesota – near St Paul -yesterday after it tipped while lifting a large hot tub into the back yard.  The crane, a four axle Grove truck crane owned and operated by local crane rental company Truck Crane Service Company of Eagan, Minnesota. The crane was properly set up with outrigger mats in place and all outriggers fully extended.

Fortunately no one was hurt and the damage was surprisingly light with a garage roof and a chimney badly damaged. The crane’s boom is also likely to be a casualty.

The company quickly called in two other mobile cranes and completed the recovery and clean up by nightfall. The homeowner was reportedly told that the accident was caused by ‘A computer malfunction’ – it looks of course like a classic overload, possibly brought on by some sort of input error on the rated load indicator?

Truck Crane Service is one of oldest crane rental companies in North America, founded in 1940. It is part of the Phillippi/Peco Equipment group.

Lifting Hot tubs and trees from the back yards of homes seems to be one of the dangerous types of lifts that crane rental companies get involved with. At least in terms of the number of incidents reported compared to the number of lifts carried out.

If you add to this the fact that in many cases they are not the most lucrative of contracts and one can imagine some companies choosing to avoid them.

The problem is perhaps that they appear to be easy – “just pop along and place a hot tub in the back garden- an hour or so and it should be done.” Easy money en route to another lift – expect too often it ends like this one and costs a fortune with the additional pain of the media exposure.

I suppose such accidents are a classic illustration that there are few ‘routine and simple crane jobs’. 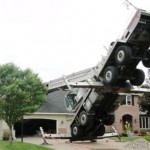