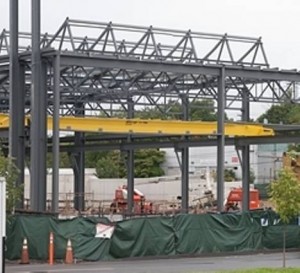 Three people were injured yesterday after a steel beam fell onto a boom lift on a science park site on the Yale university campus in New Haven Connecticut. The two people in the platform were wearing harnesses and remained in the basket but suffered injuries from the falling beam. One man was pinned under the beam and is in critical condition as is a man who was in the platform. A Woman who was also in the platform also sustained less serious injuries. A team from Connecticut Occupational Safety and Health Administration is investigating the accident.