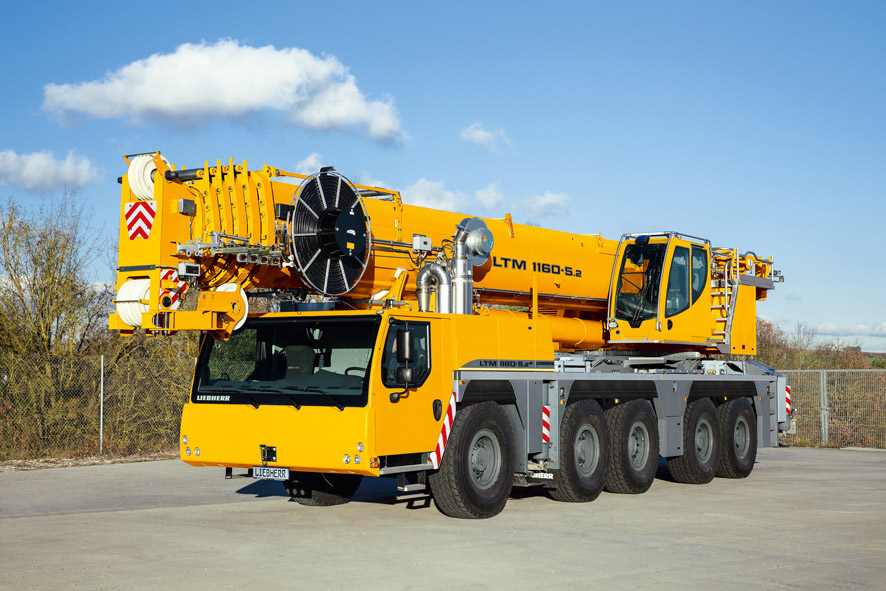 One of the most notable features on the LTM 1160-5.2 is that the superstructure is powered by a single engine in the crane chassis using a mechanical shaft, rather than the twin-engine concept normally used on cranes in this class. This is the second five-axle crane model to feature the single-engine drive concept, which Liebherr first presented at Bauma 2013 on the LTM 1300-6.2.

A Tier 4 Final, six-cylinder Liebherr diesel engine develops 544 hp at 1900 rpm and torque of 2,516 Nm at 1350 rpm. Force is transferred to the crane axles via the 12-speed ZF-AS Tronic gears. The intarder, a zero-wear hydrodynamic brake integrated in the gearbox, acts as a retarder. In addition a Telma eddy current brake is available as an option.

The mechanical shaft ensures a high efficiency level, and low engine speeds in the chassis engine provide sufficient power for crane work. Benefits of removing the separate superstructure engine include reduced maintenance work and weight. The omitted weight can be used for load-bearing components, thus increasing the crane’s load capacity.

An add-on program has been developed for the new crane drive concept with just one engine and a mechanical shaft to allow the machine to be run with low fuel consumption. This enables the complete pump drive to be disconnected automatically when the engine is idling and then reconnected by the intelligent controller in a matter of seconds when it is required.

Like nearly all LTM mobile crane models, the LTM 1160-5.2 features pneumatic disc brakes. The rear axles of the 190-ton model have active electro-hydraulic steering depending on the vehicle speed. This increases the maneuverability of the vehicle and reduces tire wear. Five steering programs can be selected conveniently at the touch of a button.

The six-part, 203-ft.-long telescopic boom on the LTM 1160-5.2 telescopes easily via the TELEMATIK telescoping system. With its 40- to 118-ft. folding jib and additional telescopic boom extensions, the LTM 1160-5.2 can achieve hoist heights of up to 305 ft. and outreaches to 249 ft. The folding jib can be erected to an angle of 0, 20, or 40 degrees. An optional hydraulic adjustment facility for the folding jib is available, enabling it to luff under full load between 0 and 40 degrees. For work in two-hook operation, a second hoist gear and a 10-ft. assembly jib and a rooster sheave is available.

With a total weight of 132,000 lbs. and a 26,400-lb. axle load, the new crane can carry its double folding jib, a three-sheave hook block, and a storage box with a generous payload.

In the hydraulic system, the electric “load-sensing” control ensures accurate work operations. Up to four movements can be actuated simultaneously. Depending on the requirements for the lifting task and of the crane driver, the slewing gear can be switched from “open” to “hydraulically locked”.

The Liebherr LICCON2 crane control is used in the LTM 1160-5.2. A mobile, multifunctional control and display unit – BTT Bluetooth Terminal – is provided for setup functions. The crane driver also has the option of attaching and removing the hook block on the crane bumper with visual contact via remote control of the hoist winch and the luffing cylinder of the telescopic boom.

The Liebherr LICCON2 mobile crane control also offers the option of simple and thus cost-effective extension into a complete remote control system for the crane. Other than the relevant software on the crane, all that is required is a console with two master switches, which the existing BTT plugs into. A significant advantage for the crane operator is that the console can also be used for other cranes with LICCON2 controls programmed for remote control operation. 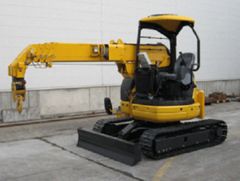