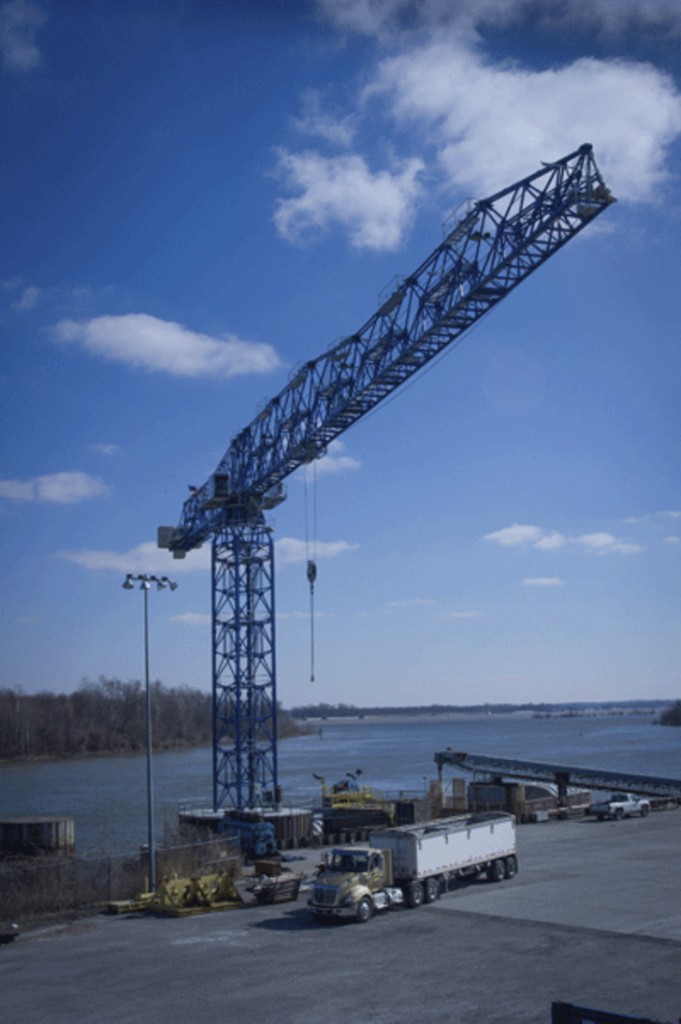 The crane, provided by Linden Comansa America, Pineville, North Carolina, USA, is the largest flat top tower crane erected in North America, the company said. It was delivered to help with increased traffic at the Riverport port, on the Tennessee River, following the expansion of the Panama Canal, which is having an impact on shipping industries around the world, a spokesperson said.

The Riverport has two dock facilities, which can handle up to three barges, including bulk and general cargo. Ken Canter, executive director of the Riverport, said, “With our new Linden Comansa 30LC1450, we have greater market capabilities for the container on barge movements to the Ohio Valley. It’s also pretty impressive to have the largest flat top tower crane in North America ready to serve traffic to our port.”

The new tower crane arrived in Paducah on 17 January 2014. Challenges during its installation included sub-zero temperatures and high winds, a spokesperson said. Despite the challenges, the installation of the 30LC1450 was completed on 9 February.

Dennis Kenna, president at crane contractor Heede Southeast, said, “Being involved hands on with the installation and commissioning of the largest flat top tower crane in North America was remarkable. With over 40 years in the industry working with Linden and Linden Comansa cranes, witnessing that machine moving 62,000 pounds [28.1 tonnes] to a radius of 191 feet [58 metres] was a memorable moment for us.”

The 48 tonne capacity 30LC1450 has a 200 kW hoist motor. Its maximum speed when loading 48 tonnes is 21 metres per minute. Jib length is 60 m and hook height is 22.8 m. The crane delivered to Paducah can be configured for either 32 or 64 tonnes capacity. It also has optional extras, including a Prohibited Zones function and a Panoramic XL cab for a better view of the load and work area. It also has a small refrigerator, an air handling unit and room for a small appliance in the cab. Work lights are also fitted.

The new 30LC1450 joins a 20 tonne capacity Linden 8000 flat top tower crane, which has been at the port for nearly 40 years, a spokesperson said. The 8000 was refurbished in the 1990s by Heede Southeast and is used to handle incoming and outgoing freight on the banks of the Tennessee River where the Ohio and Tennessee rivers meet.

Speaking on the new 30LC1450 model, Bill Carbeau, vice president of business development for Linden Comansa America, said, “The differences in tower crane technology between the old 8000 and the new 30LC1450 are dramatic. Digital readouts for wind, radius and weights are clearly displayed and crane operators can easily monitor all functions for proper operation. In addition, the frequency drives for slewing, trolley and hoisting movements allow for much less consumption of electricity.”