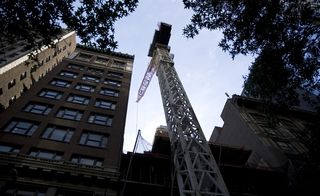 Judge Paul Wooten rejected a request by International Union of Operating Engineers Local 14-14B for a temporary restraining order preventing the rules from being put into effect. The rules were supposed to take effect in late May, but background checks and other paperwork mean it will be several months before any licenses under the new standards can be granted. The judge set a hearing for Aug. 8 on the union’s lawsuit challenging the rules.

The operating engineers filed suit in state Supreme Court in Manhattan last month arguing that new crane licensing rules would “unlawfully dilute safety standards.” The suit argued that the Department of Buildings exceeded its authority by eliminating legislatively mandated rules; that the new rules invalidly do away with the requirement that applicants for a license train in the city; and that a new national test does not take into consideration the city’s unique urban density.  In the near term, the union had asked for a restraining order preventing the rules’ implementation until the court decided the lawsuit.

“We are pleased the request for a restraining order was denied and that the Department of Buildings can move forward with its new requirements,” said Karen Selvin, an attorney for the city. “These requirements will ensure we continue to have the best-qualified, best-trained crane operators transforming our skyline.”

A spokesman for the union said the matter is far from decided.  “We are gratified that the judge recognized the uniqueness of safety issues in New York City and therefore scheduled a hearing on Aug. 8 on the matter,” the spokesman said. “The larger issue is the hearing of whole matter in August.”

The filing was the latest move in a protracted war, allegedly about safety, between the operating engineers and developers. The move to change licensing requirements followed several high-profile crane collapses, but the dispute over how to license operators has had as much to do with money and power as it does safety.

Publicly, developers, through the Real Estate Board of New York, have also focused on the safety issue. They argue, however, that the new rules would actually raise, not lower, standards in the city.

Mayor Michael Bloomberg has defended the rules and criticized the operating engineers for trying to block them.

Local 14’s grip on crane work gives the union leverage to freeze large developments—which invariably need a crane to hoist materials up, down and across work sites. Historically, the union’s power has helped it resist making concessions to bring down development costs. In an effort to ward off the new rules, Local 14 made a series of 11th-hour concessions last summer that averted a strike. But the rules proceeded anyway, leading the union last month to request an injunction. It is also pushing legislation in the City Council that would enable it to maintain control over who gets to work here.

To obtain a license now, most crane operators must go through Local 14 to get the necessary experience. The new rules will allow operators from other cities who hold a Class-A license—needed to work on medium-sized mobile and tower cranes—to get licensed in New York if they have held a similar license elsewhere for at least 10 years “and can demonstrate seven of those 10 years of experience were in an area of comparable urban density” to the city. Less experienced operators would still need a year on the job in the city before being able to get a license.

Many developers see the new rules as an opportunity to break the Local 14 monopoly by allowing out-of-town operators to get licensed here—though those workers may belong to a different local of the same union. Hourly wages, including base pay and benefits, for crane operators here total around $82. Annual pay varies, of course, because the work is not year-round, nor is it steady. Engineers in Chicago make $66 an hour in total compensation, and in Washington, D.C., they take home $39 an hour.