As in the past all examples appear to have come out China and include copies of most of the big brands – Tadano, Kato, Liebherr and Terex. When we use the term Counterfeit we are not talking about the close copies that some less scrupulous manufacturers have built and marketed under their own names. The ones we are referring too are copies – usually poor quality – of a manufacturer’s crane that are badged up to fool less knowledgeable buyers on the used equipment market.

The worst and possibly the most blatant case is one we have been sent today, where Henan Hongfu Construction Machinery Co., Ltd is advertising what it claims is a Terex Demag AC500-2 All Terrain from 2006 on a web site called EC Plaza Global. 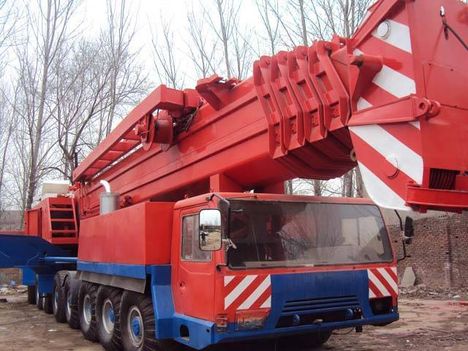 A quick trawl through the internet found a further three examples of these copies, fortunately they look nothing like the real thing so few savy western buyers will be fooled for a minute. But sadly less informed buyers might be.