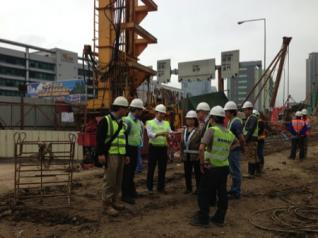 A crane truck accident occurred on the light rail transit (LRT) construction site across from the airport in the Avenida Wai Long in Taipa Monday evening. No-one sustained injuries in the incident; the cause of the accident is still under investigation.

The accident occurred around 11:30 p.m. when a crawler crane truck suddenly tilted as it was transporting a RCD machine [reverse circulation driller] from one bridge pier to the next. According to the Transportation Infrastructure Office (GIT), no injuries were caused by the accident and the affected lanes of the avenue were gradually re-opened from 6 a.m.

Swinging-type and tower-type mobile cranes are the most used lifting equipment on the construction site for transporting large-scale machinery or materials to specified locations effectively and efficiently. However, serious consequences including casualties and losses to property may be caused by inexperienced operation. Common accidents while operating mobile cranes include the crane tipping over on its side; breakage of the hoist boom or cable; the crane touching an overhead electric cable; dropping the suspended cargo or hitting nearby persons or objects.