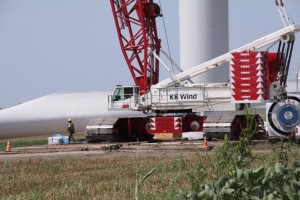 As the United States marches toward energy independence, 2012 was a banner year for wind energy projects. According to the American Wind Energy Association (AWEA), wind energy projects throughout the country posted their strongest year in 2012, bringing online a record 13,124 MW of power in 26 states and Puerto Rico. In the fourth quarter alone, 8,380 MW were installed. By the end of the year, wind generated more than 60,000 MW of power.

Recently, Developer RPM Access (RPMA), LLC of West Des Moines, with help of two Terex® CC2800-1 crawler Cranes, completed the Hawkeye Wind Farm project in rural Fayette County, Iowa. This was one of the installations contributing to the record-breaking year for the wind industry. Hawkeye’s 15 wind turbines generate enough power to provide for the needs of more than 12,000 typical family homes each year. More importantly, the clean energy source will save at least 60 tons of carbon dioxide, 360 tons of sulfur dioxide and nearly 225 tons of nitrogen oxide emissions.

The volume of wind projects poses a double-edged sword for a relatively small developer like RPMA. On one hand, market demand for new wind turbine erection is strong. On the other, a limited supply of crane capacity makes scheduling turbine projects difficult.

“Heavy lift cranes for turbine construction can be the project bottleneck,” explains Steve Dryden, president of RPMA. “Heavy lift contractors will typically complete the big jobs first,” leaving the smaller projects like Hawkeye waiting for a crane to become available.

RPMA has learned that efficiency is the key to getting heavy lift cranes like the Terex CC2800-1 at the jobsite when it’s needed. The company works with its contractors to maximize the number of lifting days for turbine erection. Prior to bringing in the heavy lifting equipment, Nordex USA, Inc. of Chicago, Ill. acted as the general contractor and started the project in November of 2011. The first projects were to develop the 4.2 mi (6.8 km) of access roads and install 11.8 mi (19.0 km) of underground cable.

The following April, crews began pouring 15 turbine foundations, which consisted of up to 605 yd3 (462.6 m3) of concrete. By the time the two CC2800-1 crawler cranes were ready to be brought on site, RPMA and Nordex made sure the infrastructure was in place, so the cranes were on site for as the shortest time period possible.

Two Better Than One

The 328 ft (100 m) tall turbines were erected on an average one turbine every two to three days. Each turbine consisted of seven lifts: 5 tower segments; a nacelle consisting of a deck, generator, gearbox, and cooling and control equipment; and a blade and hub assembly. These tall turbines present more of a challenge than the 262.5 ft (80 m) tall structures of just a few years ago, as there is a significant increase in wind shear between 262.5 and 328 ft (80 and 100 m) above ground level.

To combat this issue and expedite turbine tower construction, the cranes were configured differently. One CC2800-1 crawler crane was equipped with enough boom and full counterweight to successfully lift the upper two tower sections, nacelle and hub/blade assembly. The second, shorter crane configuration had just enough lattice boom installed in order to erect the first three tower segments to a total height of 203.4 ft (60 m).

The nimble Terex CC2800-1 crawler crane led the construction charge, which began in early July, by erecting the first three tower segments. These heavier base sections ranged in weight between 79.6 and 81.7 ton (72.2 and 74.1 t). After completing installation of these three base tower segments, the crawler crane was moved the 0.25 to 1 mi (0.4 to 1.6 km) to begin construction of the next tower base.

The second, taller CC2800-1 followed closely behind to complete the turbine installation. This configuration was the workhorse of the project, lifting the top two tower segments, 300-ton (272-t) nacelle and 37.5-ton (34.0-t) blade/hub assembly.

This crawler crane can be quickly configured for wind turbine erection applications with only a few special components, which include reinforced main boom segments and a rigid luffing jib developed specifically with wind power-related applications in mind. Offering a 661 ton (600 t) maximum lift capacity at a 32 ft, 10 in (10 m) radius, the Terex CC2800-1 can erect 328 ft (100 m) turbines without the need of its Superlift system, which saves time with crane assembly and disassembly. This provided a great benefit to RPMA for this project.

According to Kevin Lehs, Hawkeye project manager for RPMA, “We had to traverse agricultural fields and cross over county and state highways,” which required the cranes to be partially dismantled at times to transport from tower to tower. “With proper planning, we were able to minimize this to twice, and we were very impressed at the speed of crane assembly and disassembly.”

When the shorter of the two CC2800-1 cranes finished constructing the three base tower segments of the 15th and final turbine, crews reconfigured the crane with a longer boom, so that it could help to “top off” the turbines. This allowed both crawler cranes to work toward each other until construction of all turbines were completed.

Within a month’s time, the turbines were finished, leaving Nordex USA to complete the final steps of the Hawkeye Wind Farm project. In October of 2012, commercial operation of the 36 MW wind farm commenced, bringing power to thousands in northeastern Iowa.

The Terex CC2800-1 lattice boom crawler crane can be converted from a standard crane to a special-purpose crane for wind turbine projects — and back — with only a few special components. These special components include specially reinforced main boom segments and a rigid luffing fly jib (LF2) with a length of 39, 78, or 118 ft (12, 24, or 36 m) that were developed specifically with wind power-related applications in mind.

In addition, the crane can be supplied with a chassis designed for road travel. The basic machine, including all winches and the A-frame, can be transported within a 13.2 ton (12 t) axle load limit. The high level of flexibility provided by these options and features saves time and money during transportation, setup, and disassembly, providing for a high level of cost-effectiveness in the process. Moreover, the time-tested Terex® IC1 control system, featuring remote radio control capabilities, makes it possible to operate the Terex CC2800-1 easily, safely, and comfortably in virtually any operating condition.