Malta Self-Erecting tower crane being used to pour concrete collapsed and landed across two buildings. The crane was being ran with a remote control which is very common for self-erectors. Most also have cabs. While there could be structural or soil or limit malfunction issues with this crane, it’s also possible that there was operator error. Notice that the tower has fallen over with the jib and I’d point towards the boom (luffing) rope. Over and over when a structural failure happens the mast still stands.
If I were to train an operator on a self erector, it would be from the cab of the crane. Being smooth is important to running the crane in a safe manner. Self-erectors move so much that a guy in the cab will learn to run smooth unless he has a death wish. They can take the intended loads, but the getting the feeling of the crane bouncing while operating will teach a guy to respect the needs of the crane more than the needs of the crew asking him to go faster and faster. Being able to yank on controls does not make you a good operator. When you get the loads swinging, especially when the load is fluid like a CMU wall mix (grout) would be for this site, the pendulum of the load and sloshing of the concrete could tip the crane even if it were structurally sound. Overturning moments must be respected on Self-erecting tower cranes. It’s fine to run the crane with the remote, but you still have to be smooth and accelerate and decelerate with respect. 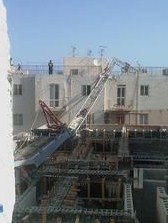