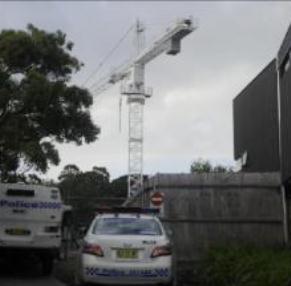 A man in his 20s is dead this morning after he and a group of friends broke into a job site in Manly, Sydney, Australia just after midnight and climbed a 40 metre tower crane.

The men were walking along the crane’s jib when one of them fell. The emergency services were called to the site in Bower Street, following a report that a man had been injured on the site.

Police established a crime scene and the area was examined by forensic specialists. The man’s next of kin have been informed. Detectives have been interviewing a number of witnesses to the incident but said that there does not appear to be any suspicious circumstances surrounding the incident.

Over the years there have been numerous reports of people climbing tower cranes at night for a lark. The majority of the time they get away with it and in many cases the site workers are unaware that anyone has even been there. The only clues being photos or video clips posted on web sites that cater for that sort of thing.

The risk of falling is always there though, especially if drink is involved. The sad thing is that the site and the contractor are likely to face some disruption, regarding questions on site and crane security.