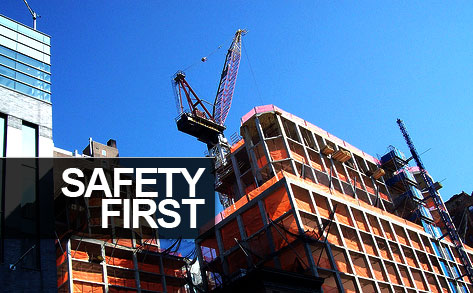 The Senate passed a bill today that requires the NYC Department of Buildings to re-inspect construction sites that have been issued hazardous violations . There is currently no mandate in place for the buildings department to re-inspect sites that have dangerous code violations and therefore companies have little motivation to correct the problems.

The bill also allows the buildings department to issue fines from $1,500 to $5000 if the problem is not corrected. The legislation was sponsored by Sen. Liz Krueger and was authored in response to recent construction accidents including two fatal crane collapses.  Mayor Michael Bloomberg and community activists supported the bill.

A release from Krueger’s office follows.

Albany, NY—New York City won a huge victory for construction and building safety today when the New York State Senate passed a bill creating new guidelines for the re-inspection of all hazardous violations issued by the NYC Department of Buildings (DoB) and civil penalties for hazardous violations.  The bill was sponsored by Senator Liz Krueger whose district was the site of two deadly crane collapses within the last year.

“Passing this bill was a necessary step toward ensuring the safety of our citizens,” said Senator Krueger.  “There have been too many instances where the Department of Buildings lacked the authority to fully ensure that construction sites remain safe which tragically led to crane collapses and numerous other incidents throughout the city.  Hopefully this legislation along with other changes made by the Department of Buildings and City Council in the last year will help put an end to this.”
The bill (S.1664) creates a duty for the DoB to re-inspect within 60 days hazardous work sites which have already received violations for posing an imminent threat to public safety.  There is currently no law that mandates the DoB to re-inspect sites which leaves little incentive for construction companies to correct the problem.

The bill also grants the DoB authority to ensure that a violation is corrected by allowing the DoB to issue civil penalties ranging from $1,500 to $5,000 if a violation remains uncorrected.  The DoB is required to return to a site every 60 days or less and continue to issue fines until the violation is corrected.  Furthermore, the legislation prohibits the DoB from lifting a stop work order or granting a certificate of occupancy until all fines are paid and all problems are corrected

“This bill creates a major economic incentive for construction companies to correct violations,” said Senator Krueger.  “While the majority of building owners and construction companies are responsible there are unfortunately some bad actors out there who without the proper motivation will continue to disregard the law and public safety if it means they can make some extra money.  Creating enforceable civil penalties should deter these people from making such decisions in the future.”

Criminal penalties are also provided for in the bill for people who knowingly prepare, file, or offer for filing a false certification of correction of an immediate hazardous condition.  These offenders will be subject to prosecution under New York State penal law for felonies and/or misdemeanors.

The Office of the Mayor along with community advocates were strongly in support of this legislation.

“In the wake of recent construction accidents including two deadly crane collapses a year ago, the Department of Buildings was in need of a major overhaul,” stated Senator Krueger.  “Our first priority should always be the public’s safety and I commend the new Commissioner and the Mayor for the steps they have taken so far.  The bill passed today will add to their progress and will help ensure that DoB inspectors have the tools they need to enforce hazardous violations.”