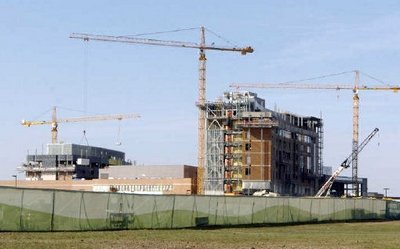 They demand attention, these marvels of machinery.  Below, a thousand workers might weld steel, lay bricks and juggle a thousand other jobs, but the eye strays up to the cranes.  Specifically, these are tower cranes, inverted L-shaped behemoths that are helping to build Parkview Regional Medical Center and add a fifth floor to Lutheran Hospital.  They’ve become part of the landscape for anyone who drives the 15 miles along Interstate 69 between the hospitals. Three cranes are spreading the work at Parkview, while Lutheran is making do with one.  They aren’t the largest tower cranes in the world, but they are some of the biggest the region has seen in recent years. Each is trucked to the construction site in sections on a dozen or so semis. It takes another crane to put them together in a days-long process.