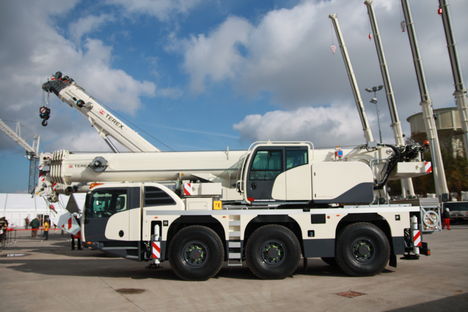 Terex has unveiled a three axle 50 to 60 tonne All Terrain crane on three axles at its open day in Zweibrücken.  dubbed the Challenger 3160, it is a light weight 50 to 60 tonne crane with 50 metres of main boom. It will lift over 35 tonnes to four metres radius and yet can meet 10 tonne axle loads if its counterweight is removed. Fully rigged it it meets 12 tonne axle loadings. The 2.55 metre wide chassis features all wheel steering and the company’s new cabs that were unveiled at this year’s Bauma. The new crane will appeal to markets where a lighter more roadable crane with long boom is appreciated fro taxi crane work.  The Challenger is the second crane that the company has chosen to give a name to, following the launch of the 100 tonne Roadmaster 8000, announced in September. It will be the first of a new family of All Terrain cranes that follow a similar principle.  The nomenclature used on this model represents the number of axles and the crane’s capacity in tonne/metres so three axles 160 tonne metres.

Liebherr delivers one of the largest mobile harbour cranes