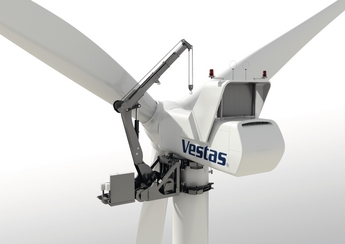 Wind turbine manufacturer Vestas has developed a new spider-like crane capable of attaching itself to the tower of wind turbines, which the company insists will slash maintenance costs for wind farm developers.

Unlike conventional cranes that have to be erected besides turbines in order for maintenance to be undertaken, the new Vestas Tower Crane (VTC) can be clamped directly to the tower of its 3MW turbines.

A spokesman for the company said the technology could deliver “significant cost savings” compared with conventional cranes, cutting the bill for replacing large components such as hubs, gearboxes or blades by 75 per cent.

“If you consider that wind farm operators need to hire a large number of trucks and a huge crane to carry out a lot of maintenance, then this has the potential to be a lot more cost effective,” he said, adding that the company was already using the technology for onshore wind farms and was planning to test its suitability for offshore projects.

Vestas said the crane, which is the only device of its type that can be attached to tapered towers, could also be used in far stronger winds than conventional standalone cranes.

“Using the VTC we can replace a gearbox in wind speeds of up to at least 17 metres per second (m/s) and it can be left on the tower in wind speeds of 28m/s, ” observed Jesper Staerke Rosengren, one of the engineers who worked on developing the crane. “A regular crane needs to be taken down in wind speeds of more than 10-12m/s.”

The company has one crane already operational and is planning to have four in place by the end of the year, with a view to developing new models that can be used on a wider range of wind turbines.