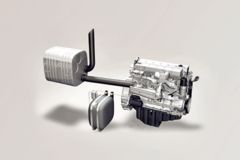 Crane and engine manufacturers have been faced with a range of choices and challenges concerning current and future engine emission laws.

At the start of 2011, substantially-reduced emission limits came into force for off-road diesel engine manufacturers.

These were in the form of Stage IIIB and Tier 4 Interim engine laws in Europe and the USA respectively, while the stricter EU IV/ US Tier 4 Final rules must be complied with by 2014.

Manufacturers have a choice between two very different approaches when it comes to tackling diesel engine emissions. The selective catalytic reduction (SCR) exhaust aftertreatment system involves reprocessing exhaust gases with a urea resin to convert harmful NOx into inert nitrogen and water. The other method is the exhaust gas recirculation (EGR) system. This reduces emissions by cooling and pumping a proportion of the exhaust gas back into the engine’s cylinders.

Diesel particulate filters (DPF), which filter out the black exhaust soot that diesel engines produce, are often used in conjunction with the EGR approach.

Liebherr-Werk Ehingen in Germany has chosen the SCR system for its range of mobile and crawler cranes. “It is more tolerant for fuel with higher sulphur content. So we can deliver a uniform system worldwide,” says Wolfgang Beringer.

“The challenge was to adapt an additional exhaust after treatment system to the engine and to integrate this system in an existing crane design. We had to solve problems concerning weight and space. There are also logistical challenges, as we have to convert the complete range of engines and cranes within a very short time. This affects not only the crane manufacturer and engine manufacturer but also component suppliers.”

“Different engine manufacturers chose different solutions based on what was determined the best for their product and for their customers. The EGR system requires greater heat rejection of the cooling systems and, in certain duty cycles, full efficiency improves,” explains Satori. “The SCR technology requires the customer to maintain additional fluid (DEF) for the engine while maintaining more commonality to the Stage 3a and Tier 3 installations. It is anticipated that the technologies will converge as engine manufacturers modify their approach to meet Stage 4 and Tier IV Final requirements,” adds Satori.

Cost, weight, space and availability of information for Stage 3b and Tier IV interim engine installations were major hurdles in the design process of engines and the cranes themselves. “We will continue to face these same challenges through the introduction of Tier IV Final. The implementation of the EGR technology for Stage 3b and Tier IV interim created a larger development effort for OEMs than the SCR technology. An associated increase in the Tier IV Final effort will be seen by those that chose SCR for Tier IV Interim,” explains Satori.

Cummins is using catalysts in its new Tier 4 Interim-compliant, 75-173 hp QSB3,3, QSB4,5 and QSB6,7 engines. However, it is using this in combination with the cooled EGR approach. The Cummins Compact Catalyst is designed not to require ash removal, servicing or a diesel particulate filter, and is designed to last the life of the engine.

The manufacturer claims it is the only fully passive after treatment system below 174 hp, and its engines will deliver up to 5% better fuel economy than Tier 3 counterparts. The company said it had decided against the full SCR approach for its 2011-compliant engines because of the bulky on-board urea tank that the method requires.

“Operators of off-highway equipment have consistently expressed a preference to avoid the additional cost, supply and refilling of an SCR system. Cummins cooled EGR and Cummins Compact Catalyst does not require this additional fluid,” a company spokesman says.

The new MTU engine has advanced common-rail fuel injection with pressures of up to 2,500 bar, while two-stage turbo charging further reduces the engine’s emission levels.

MTU met the January 2011 targets in Europe and the US by using SCR for engines below 560 kW, and EGR for engines from 560 to 730 kW – sticking to compact designs in both.

The state-of-the-art off-road engines for Tier 4 Final compliance in 2014 are similar designs, featuring a small number of external connections – such as for coolant pipes and air ducting or electronic interfaces – to speed up installation. “The latest engine incarnation is a quantum leap, not just technologically speaking but in precision manufacturing terms as well,” according to an MTU spokesman.

For Liebherr, current and future challenges will come in the design of a completely new engine with diesel particulate filter (DPF) and SCR system and to integrate it into the complete crane range, says Beringer.

Satori continues that the most significant development comes in Cummins’ announcement that the diesel particulate filter (DPF) will not be required for their Tier IV Final solution for their 9 litre and smaller engines. “Cummins has also indicated that it does not anticipate any increased heat rejection requirements for Stage 4 and Tier IV Final,” says Satori.

Are you in the Social Media world, or on sidelines waiting,