Spotted by a reader in the Isle Of Man – between the UK and Ireland – a painter using a ladder and a truck mounted lift in an unusual manner.

The truck mount is well set up – although it does block the side walk/pavement it has a few cones sent out and warning signs for men working overhead. However that’s where it ends, the operator has allowed a painter to use a ladder as a bridge platform between the aerial lift’s basket and the roof. 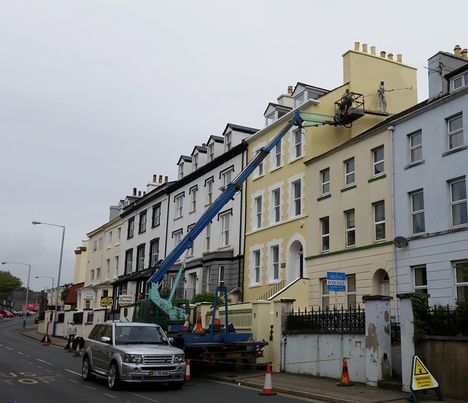 The painter is tied on to the ladder, which is likely to simply drag it down on top of him should he fall.

In the words of our correspondent: “Witnessed working at height, while driving out of Douglas to Ronaldsway Airport. That is an ordinary ladder section they are using, loosely straddled between the cherry-picker basket and the building roof apex, with a bit of wooden board (not even the length of the ladder) for the painter to stand on. “ 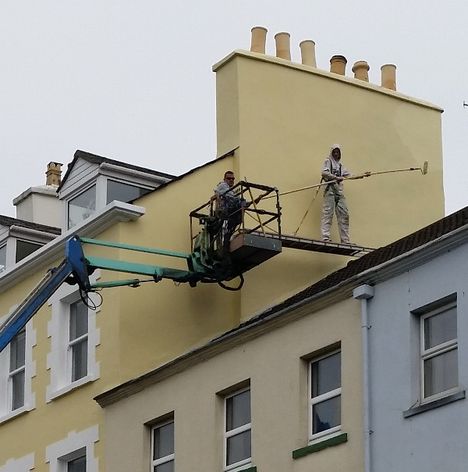 A closer look at the set up

“The painter has his shock absorbing lanyard clipped to one of the rungs of the ladder. Question: Forget for a moment the illegal use of the cherry-picker! What might have happened in the event of the painter falling off the horizontal ladder section, if he had then slid down the roof until his lanyard tensioned against the ladder rung, given that the ladder section on which he was standing was totally unsecured?”

A definite one for our Death Wish series.