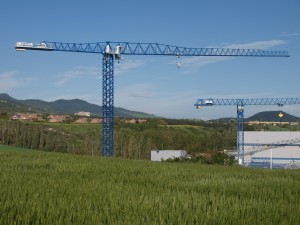 Based on the design of the company’s 21 LC 750 tower crane launched in 2009, the 21 LC 660 tower crane’s first jib and counterjib sections are assembled together directly over the slewing platform through fast conections, which saves time, reduces costs in auxiliary equipment and improves safety. Most of the jib sections of the 660 are the same as the 750, which enhances the modularity and section interchangeability between both cranes.

A new D35 mast section was designed for the tower of the 21 LC 660, which is more economic than the tower section of the 21 LC 750 (D36). Both sections have the same dimensions (5.5m high and 2.5m wide or 18 feet high and 8.2 feet wide), which makes them compatible and enables them to share the same hydraulic jacking cage. The D35 mast sections can be divided in four panels, are easy to assemble and transport, and are easily joined to other sections by pins.

The 21 LC 660 also features Linden Comansa’s latest features, such as its Effi-Plus high speed hoist mechanisms, which enable hoist speeds up to 244 meters (800 feet) per minute; its PowerLift System, which improves 10 percent of the load diagram with reduced speeds; and its slewing mechanisms with frequency control for reduced energy consumption.

The Secret of Getting All the Referrals

For Ironworkers Up High, a Movable Feast