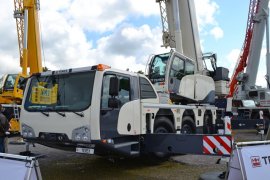 Terex says that its new Challenger 3180 all terrain is the only 3-axle, 60-tonne capacity class machine currently available that is designed for one-man operation

The new machine also represents a new approach for naming crane models, based on load moment rating rather than maximum safe working load.

Across the industry, the model names of mobile cranes have for years indicated their maximum rated capacity, such as the AC 60 – 60t capacity – which the new Challenger 3180 replaces in the Terex product line up.

Terex says that it is trying to inject honesty into the crane business. Both Terex and its competitors have been guilty in the past of allowing their cranes to be rebadged by customers with a high number with which they were originally sold. Manufacturers will also define a crane as, for example, a 200 tonner, yet in its basic configuration the crane might not even be able to lift that amount. By classifying it as a 200-tonner, though, the manufacturer is positioning the machine in that market segment because throughout the crane’s load chart, or at long/high reach, the crane has comparable abilities to a ‘genuine’ 200 tonner.

To clear up all this nonsense and confusion, Terex has decided to strike out on its own and embrace the – technically more meaningful – load moment system. Load moment rating in tonne-metres indicates the maximum value of load in tonnes multiplied the maximum radius in metres to which that load can be lifted. (e.g. 100tm = 10t lifted at 10m, or 2t at 50m etc)

The tonne-metre system is already used universally in the knuckle-boom truck loader crane segment. For mobile cranes, however, it is mildly revolutionary.

Under the traditional model naming system, Terex would struggle to justify call the Challenger 3180 a 60-tonner. Its maximum lifting capacity is 37.9t at 4m radius. But as cranes are rarely used for such close lifts, this headline figure fails to portray the full capabilities of the crane.

The crane has been designed to be fully self-contained, without the need for any support vehicles, to meet markets like the UK where axle loadings up to 15t per axle are permitted. It is road legal in the UK with a 50m single-cylinder telescopic boom, a 16m extension and a full 12.1t of counterweight.

In markets where the weight restrictions are tighter, Terex offers the 3160, which is the same crane but with a lighter boom, and so reduced capacity.

Terex Cranes UK general manager Lee Maynard said: “We are very excited about introducing the unique cost/performance advantages of our cranes to our customers. Especially with the Challenger 3180, we are confident that this new machine will be the focus of great interest in the UK.”

Whether Terex succeeds in leading the industry to greater honesty and clarity in crane nomenclature, or whether it leads to more confusion, only time will tell. For tonne-metre rating to become the industry norm in branding will require competitors to follow Terex’s lead.