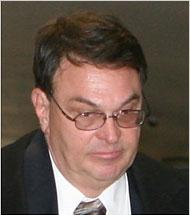 The family of a crane operator killed in a 2008 Upper East Side tower crane collapse is furious that the equipment’s millionaire owner has opted for a non-jury manslaughter trial.

“He’s afraid the people of a jury will see right through him,” said Maria Leo, whose son, Donald, died in the East 91st Street collapse along with a second worker.

Crane magnate James Lomma — owner of New York Crane & Equipment Corp., one of the biggest construction equipment providers in the Northeast — today formally waived his right to a jury trial, opting instead for a bench trial presided over by Manhattan Supreme Court Justice Daniel Convisor.  The trial is scheduled for February 21.

“This shows his total disregard for the very people of this city who he puts at risk with his cranes,” Leo family lawyer Bernadette Panzella.

Prosecutors have blamed the collapse of Lomma’s Kodiak tower crane on a cheaply re-welded crack in the crane’s turntable, a massive metal bearing which allows the boom and cab to pivot.

The faulty repair cracked again on the very May day that it was put back into service, causing the boom and cab — with Donald trapped inside — to plummet 200 feet to the ground, crushing the second worker, Ramadan Kurtaj, on the ground.

“Clearly the defendant feels much more comfortable without the citizens of Manhattan judging him,” said Kurtaj family lawyer Susan Karten. “We don’t have much faith in this whole process,” she added.

Lomma is accused of cutting numerous corners — including having violated city regulations in failing to employ an engineer to oversee the repairs and failing to hire a certified welding company to do the work.

Lomma has insisted he is innocent, and is expected to argue that the Department of Buildings inspected and approved the repair. His lawyer, Andrew Lankler, declined to comment on the decision to proceed with a non-jury trial.

Two of Lomma’s cranes collapsed fatally in 2008, though he was only charged in the 91st Street incident. The manslaughter trial of a master crane rigger blamed in the second collapse, on E. 51st, which killed seven, ended in acquittal by bench trial in July, 2010.

By leaving his fate in the hands of a judge, Lomma avoids having jurors view — and potentially be prejudiced against him by — the trial’s gruesome victim medical evidence. Both men suffered horrific crushing injuries, the details of which will now be seen by a judge alone.

Crane comes down in KL