A man has died, while another was injured yesterday in Kuala Lumpur, Malaysia after the truck mounted lift they were using overturned.

The man, said to be in his 30s were repairing the roof of a four storey apartment block in the Kampung Keramat district of the city, when the ground appears to have given way beneath the rear outrigger. 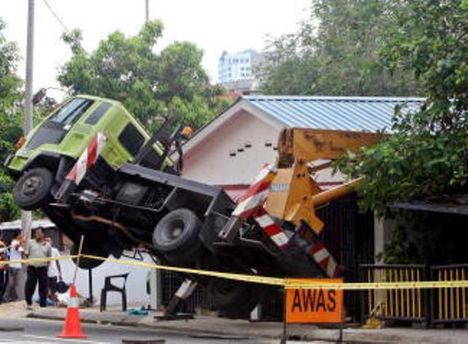 The ground gave way beneath the rear outrigger

The machine was set up with the outriggers on the sidewalk on ground that falls away. The operator had used small mats, but the ground was too unstable to support the weight once the boom was fully extended.

Any incident in which people are injured while using such equipment is distressing, the sad thing in this case is that the operator clearly knew enough that he has used some outrigger mats, although by their size, they are probably more to do with avoiding damage to the road surface than to spread the load.

A danger though is that anyone thinks that the use of a mat is a panacea to prevent overturning. Even with the poor photograph we have received, it is clear that the machine should never have relied on such a precarious looking sidewalk/pavement for stability.

A large, thick mat would have helped, but ideally the machine needed to sit back a little and relied on the street surface. From what we hear though the machine could only just reach the work and was extended to its maximum outreach.

Knuckle booms and mobile cranes stand out at SAIE