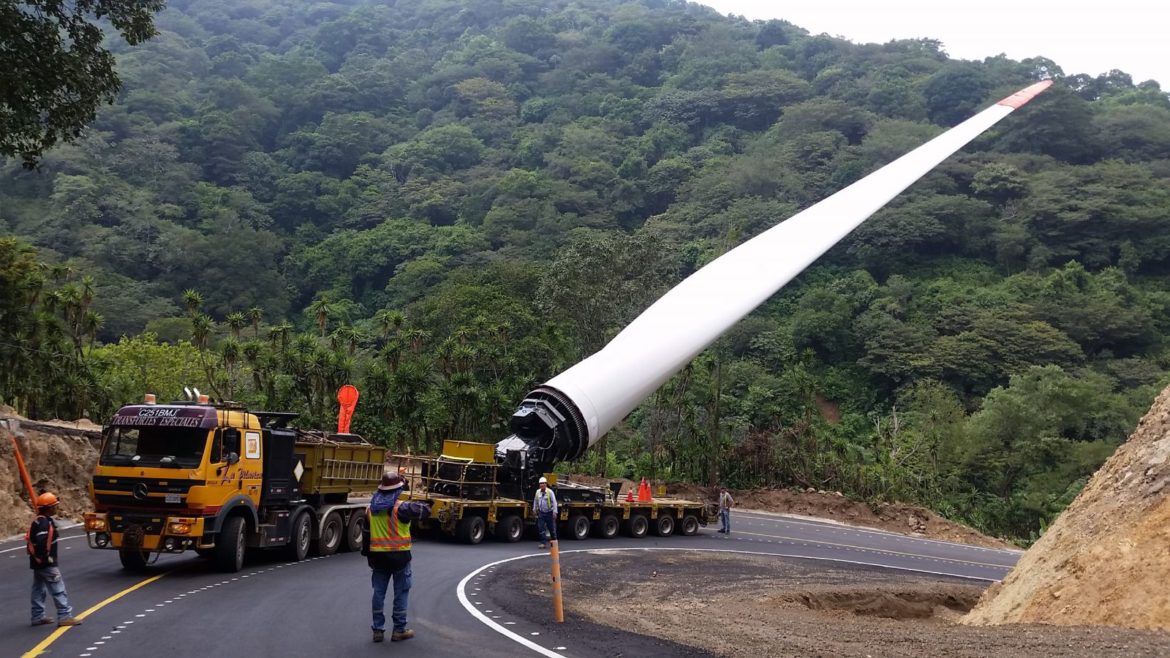 August 30, 2016 – The route to the Viento Blanco Wind Farm in Guatemala is 10 kilometers long and leads past an active volcano. It follows a narrow winding mountain road lined with trees and rock overhangs and gradients of up to 18% uphill and 13% downhill.

Seven Vestas V 112 wind turbines are being installed at the wind farm. The rotor blades were transported over a distance of 80 kilometers from the Guatemalan port of Puerto Quetzal to the Viento Blanco site by the Daco Heavy Lift de Centroamerica haulage company using an FTV 300 blade transport device from Goldhofer.

The FTV 300 met all the requirements for handling such a demanding operation. There was no need to blast any rock along the mountain road, cut the power to overhead lines, or take out any of the trees along the road. With the FTV 300, Daco’s heavy haulage experts were able to raise the rotor blades to any angle up to 60 degrees. That made it possible for the narrow bends to be negotiated at walking pace without the risk of contact with the embankments.

An additional challenge was presented by the dynamic wind forces acting on the rotor blades in the raised position, when they are up to 50 meters high. That meant Dacotrans had to have a wind force specialist continuously monitoring the FTV 300’s integrated anemometer. In order to ensure that the rotor blades are always correctly positioned for the optimum wind attack angle, the FTV 300 has a 360 degree pivot system that permits the attached blade to be rotated around its own axis as required.

Thanks to this combination of flexible tilt angle and blade rotation, all the critical sections of the mountain road were negotiated with ease, while passages under the numerous overhead power lines were handled by simply reducing the angle of tilt. As a result, all 21 rotor blades were transported up the mountain in just three hours each.

The first 70 kilometers of the journey was motorway driving. The last 10 kilometer’s, however, involved more than 16,000 man hours for Daco Heavy Lift, who completed the operation with all the rotor blades in 40 days.