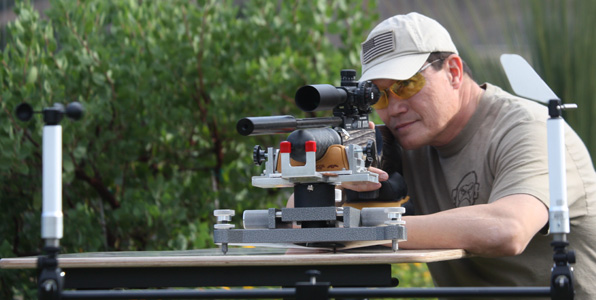 California’s Jim Ramsay entered the Extreme Benchrest competition as an amateur marksman but he finished it by besting the pros. His not-so-secret weapon? A Navis Wireless Wind Speed Sensor. Even more impressive was that it was his first time in competition and he had less than two months to practice.

What is Extreme Benchrest?

Extreme Benchrest is an annual rifle competition held in Arizona and hosted by Airguns of Arizona and the Phoenix Airgun Club. Benchrest refers to the gun sitting on a gun rest, meaning the operator isn’t standing or sitting, isolating all the variables. “The competition comes down to trigger control, breathing, gun performance and individual interaction with the gun,” says Jim. “The biggest factor is the wind.” In the competition, all participants qualify at 75 yards. Four relays are held, two for each category. The top ten from each round are chosen to compete on the final day of competition at 100 yards. The target consists of concentric circles, with the largest circle being 5.25 inches in diameter. The closer a participant is to the center (a bullseye roughly the size of an aspirin tablet), the higher the score.

Up until now, measuring wind speed at a rifle competition was done mainly through the use of wind flags. This is a skill in itself since it takes a lot of training and experience to equate the flags to a miles per hour figure. “Ballistics programs take into account wind speed, miles per hour and wind direction,” says Jim. This calculates a wind adjustment value. Jim wanted to apply that same principle in the competition and began by looking for equipment measuring wind speed that would be used in construction. He wanted a wireless one for the shooting range so it could transmit data back to his smartphone. An online search turned up Navis along with the supplier, BigfootCrane. “Even from reading the brochure online, it seemed to be exactly what I needed so I got a system sent out to me.”

The most valuable part of the software, Jim says, is being able to see a running average with a history over the previous two minutes. This let him gauge where the averages were occurring. When it came to Extreme Benchrest, he was able to base his calculations on the average then adjust for that particular, which gave him a very qualified window of opportunity. “There was definite strategy involved. I could watch the running history to see much I had to adjust, just by using the sighters to see when the wind speed would return.” Jim figures he was the only person using the Navis Wind Speed Sensor technology at the competition. One competitor had a hand-held anemometer but it was mounted to his rifle scope, which meant he was measuring wind there rather than at the target. This would preclude him from being able to factor in other variables like speed or velocity. Jim set his Navis anemometer at the one-third mark, which is where he believed the most influential winds were located. “Ideally, you want to have the system close enough to accurately characterize wind environment but not next to the table where you’ll get disturbances as the wind flows around things.”

“The Navis Wireless Wind Speed Sensor performed even better than I expected, providing me with accurate real-time information right in the palm of my hand.”

After the competition ended, Jim was asked if what he was using was a weather station. It only took a few minutes to explai what he had and how it worked. Not surprisingly, he ended up exchanging contact information with people who wanted to follow up with him at a later time. He noted that while several of the pros belong to an older demographic, there were younger members of the crowd who were only too eager to embrace the latest technology. “The Navis Wireless Wind Speed Sensor was a big hit with everyone but I really appreciated it at a completely different level because I hadn’t had time to fully train using the wind flag system.”

Are You a True Believer or Just a Salesperson?