One of the largest floating cranes in Eastern Europe, the 680 tonne, 93 metre boom Zakharii LK-600 capsized yesterday while working on the Podilskyi-Voskresenskyi bridge over the Dnieper River in Kiev. 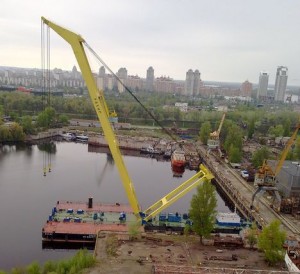 Zakharii LK-600 before the incident

All eight people on board escaped uninjured, five managed to get to safety under their own steam, while three had to be rescued by the emergency services. All eight refused offers to be taken to hospital.

The crane has been working on the bridge for some time, we do not have any details of what caused it to overturn, although it looks as though at least one of its two floating stability barges broke away, significantly reducing its lateral stability. 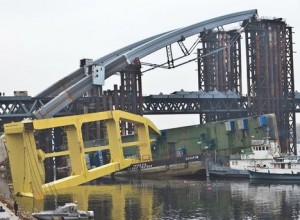