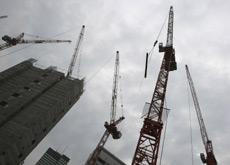 “For the last couple of months it is zero, totally dead,” David Semple, managing director of Manitowoc Cranes, said of the number of orders the company has received from Dubai.

December 2008 was the turning point, he added, and since then business has been predominantly outside the UAE, with Saudi Arabia forecast to be the biggest market in 2010.