We now understand that a man who died on a London construction site on Wednesday was crushed after a concrete stairwell was dropped on him while it was being lifted into position.

The incident occurred at the site of the new Francis Crick Institute – medical research centre going up in the Kings Cross area of the city. The man said to be in his 30s was declared dead at the scene and was employed by a subcontractor on site. The main contractor is Laing O’Rourke. 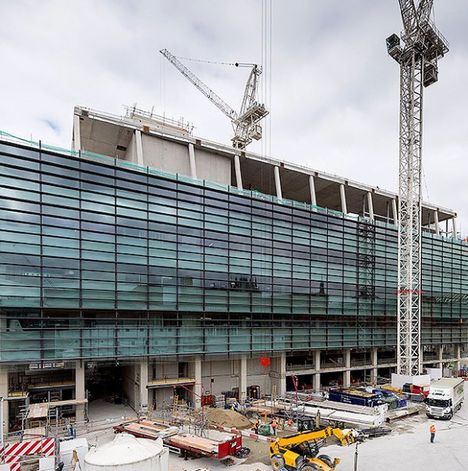 A spokesman for the contractor said: “We can confirm that at approximately 5pm on Wednesday 6th November, an incident occurred at the construction site of the Francis Crick Institute in London, in which a sub-contractor’s construction worker suffered fatal injuries. The thoughts of Laing O’Rourke and the entire Francis Crick Institute project team are with the family and colleagues of the deceased at this time. While investigations are continuing, it would be inappropriate to comment further or speculate as to the cause. the site has been closed and will remain so until Monday.”

While we have been told that the load was dropped from a relatively low height, we have no idea if it was being lifted by one of the two tower cranes that remain on site, a smaller crane or it was being shifted with other equipment.

The Health & Safety Executive is investigating in conjunction with the police.