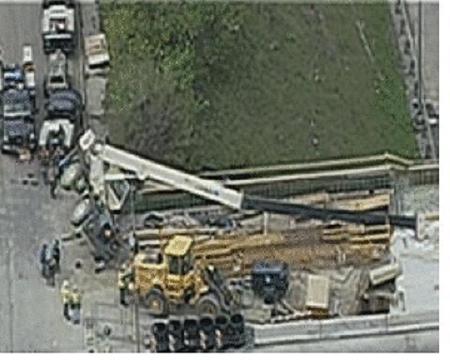 A Rough Terrain crane tipped over on an overpass over Interstate 57 in Chicago yesterday, seriously injuring a man that was hit in the chest by the falling crane. The crane operator was also badly shaken.

The 59-year-old man was reported to be in serious to critical condition last night, although he had been conscious when taken to hospital. The operator was treated for shock but we understand he was released relatively unharmed.

While the cause of the accident is not clear it does look as though it might be connected to the outrigger beams not being fully extended, while two sections of the boom on the large Lorain unit were extended over the side.